Comebacks galore! Every winner comes from behind 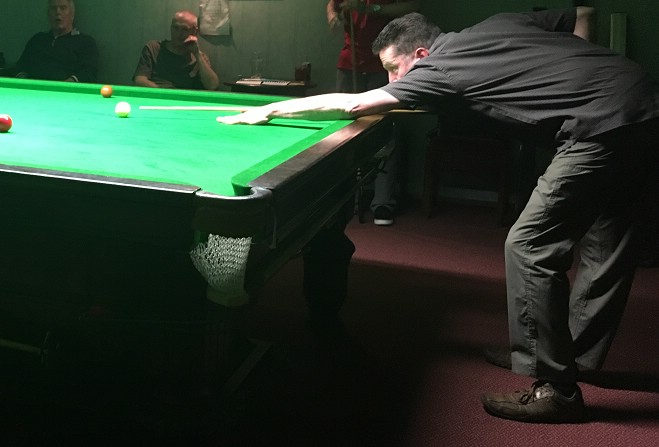 Shaun Roberts has the week's highest break with 40

Week seven of the 2018/19 Macs Builders Merchants snooker league was a remarkable one, as all six winning teams had to come from behind to take victory.

There was high drama at Finch Hill especially, as the two home sides raced to quick-fire 2-0 leads.

Finch Hill 'Musicians' went ahead against Port St Mary Legion through Peter Glover and John Kennish – Glover had two separate breaks of 20, and recently-crowned Champion of Champions Kennish had a 21.

It was a similar story on the other table as the opening pairing of Finch Hill 'Mob', Tom Miller and Peter Kirkham, obliterated their 'Young Guns' opposition with breaks of 31 and 25 for Miller and 26 and 20 for Kirkham.

But in both matches, the tide then turned.

Port St Mary's Shaun Roberts produced a composed 40 break, the highest of the week, to defeat Mike Doherty, and meanwhile Dollin Mercer of the Finch Hill 'Young Guns' hit a 22 clearance to defeat Steve Finnegan 89-15 in their scratch game on the adjacent table.

Marc Morley and Nick Stephens both won for the visiting teams to make it 2-2 on each table, and then Terry Boyle won the decider for Port St Mary and Darryl Hill beat Champion of Champions finalist Peter Crellin 63-12 in another scratch game, aided by a break of 29.

It was a similar story at Douglas Snooker Club, as the 'Hurricanes' went 2-1 up after wins for Paul Smith (with a break of 26) and Chris Dagnall, but league leaders Peel Legion came out on top after Kyle Darby and John Kelly won the last two frames, despite a break of 21 for Gary Conwell.

Again, on the adjacent table, the 'Wannabes' found themselves 1-0 down after Marek Kenny beat Harry Minor, but Steve Cowin, Paul McKinstry and Steven Harvey secured another comeback to win 3-2 – an impressive break of 31 wasn't enough for Graham Ashton.

At Malew, it was a familiar tale – Malew 2 found themselves 2-1 down after wins for Ste MacDonald and Zain Abideen of the visiting DSC 'Newbys', but Mark Quinn had a break of 24 to set up a decider, which was duly won by teammate David Quayle.

And again in the north, St Olaves were 2-1 down after John Faragher and Martin Costain of Malew 1 beat Dan Crawley and Sean Corkish, but Benito Mongiovi and James Kerr completed a sixth comeback out of six.