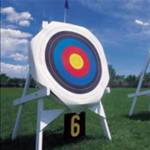 Isle of Man Sportswoman of the Year and GB International Aalin George has won the silver medal in the ladies compound division at the Commonwealth Regional Championships.

The event, which also incorporated the EuroNations Archery Championships, was held in Guernsey this weekend.

Aalin’s FITA score of 1347 was only beaten by four points by former world champion and England competitor Nichola Simpson.

It was a fiercely contested division with the top five positions being separated by only six points.

Aalin entered the last of the four distances in fourth position but recorded a score of 357 for the 30m distance - just three points short of the maximum 360 - to claim a much deserved silver and once again prove her status as the Island's leading lady compound archer.

This Grand Master Bowman score should secure her a position at next year's Commonwealth Archery Championships.

In addition to this result, the Isle of Man ladies compound team of Aalin, her younger sister Kirsten, and Sarah Rigby took the bronze medal in the team competition, behind England and Scotland respectively.

Sport Aid recipient and Junior GB squad member Kirsten was competing at her first international tournament and did not come away disappointed.

With a Master Bowman score of 1299 she finished in ninth position overall in the individual competition.

Saturday proved to be slightly tricky for the team, with both glorious sunshine and a wind to test them.

But with such brilliant results, the George sisters have proved that they can shoot well in all conditions.

It has been noted by their coach and IOM team mentor that they are particularly strong in the wind - no doubt a skill that can be attributed to their training at home on the Isle of Man.

This new event was organised to promote the sport of archery within the Commonwealth nations and to raise its profile.

The aim is to get the sport included in future Commonwealth Games.

Aalin and Kirsten George, Peter Mumford and Sarah Rigby would like to thank and acknowledge all those who have made this trip possible.

they include Isle of Man Sport and the NatWest Island Games Association Development Scheme, who assisted with the travel costs, and to all of the members of the Isle of Man Archery Club for their support and good wishes.