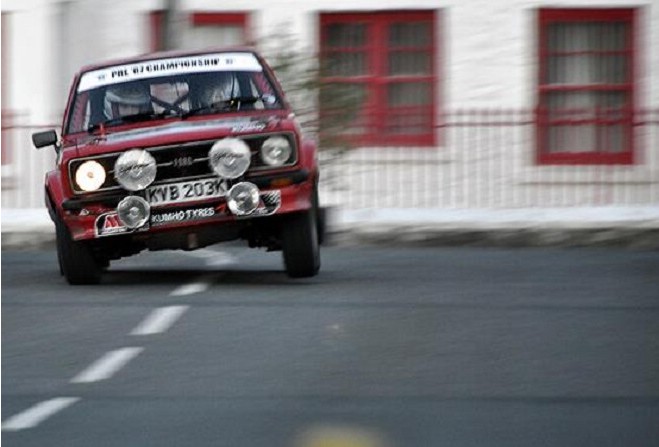 Nine more stages start at 10am

The two crews were tied for the lead of the event after the opening loop of four stages that included Druidale, Slieau Whallian, Round Table and Brack-a-Broom, before Newby eased ahead as rain fell from stage five onwards.

The lead had built up to 18 seconds after SS7, before Mackinnon hit back on the final run of the night to set up a thrilling finale.

The leading locals are father and daughter crew Nigel and Kayleigh Cannell, holding third in their Mitsubishi Evo 9 despite two stalls on Druidale, with TT star Michael Dunlop and local co-driver Rob Fagg a superb fourth in their MkII Ford Escort.

Other leading locals include Dan Colley/Charlotte Shimmin (7th), George Collister/Adam Yates (8th) and Manx Grand Prix winner Andrew Dudgeon 9th. Dudgeon and co-driver Joseph Dooley led the rally on stages one and two in a Mitsubishi, but then dropped almost two minutes on the next test at Snuff the Wind when the car cut out.

Over a quarter of the field are already out of the event, including reigning Motor Mall Manx Rally Champions Daniel Harper/Chris Campbell, who put their Mini WRC off the road just three miles into the opening stage on Druidale.
Also gone is Paul Bird. Struggling with gearshift issues, he crashed his Ford Focus WRC out at Round Table on SS7.

There are nine further closed roads stages across the north of the island today, The Curraghs, Andreas and The Dog Mills to be tackled three times each, from 10am.