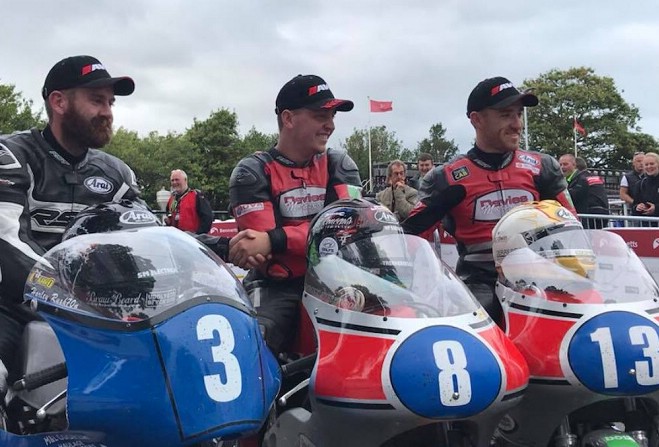 Dom 'the Bomb' Herbertson has won his first ever Classic TT, in the Locate.im Junior Classic TT.

It's also the 27-year-old's first win on the Island's TT Mountain Course.

His place on the top of the podium wasn't always clear though with an early lead from Michael Rutter, with Jamie Coward close behind.

Herbertson was in third though, a consistent threat to the top 3 from the start.

By end of lap 1 Rutter had a 9 second lead, with Herbertson stealing second place by the end of the lap ahead of Coward.

In lap 2 Herbertson gave an impressive performance - starting 9 seconds slower than Rutter to taking the lead by Cronk Ny Mona.

But a dramatic end to lap 2 saw Rutter pull into the pits with a flat rear tyre and consequently retire from the race.

Herbertson was comfortably in front in the third and final lap by 13 seconds, with Coward behind, 1 minute 21 seconds faster than Alan Oversby who sat in 3rd.

Oversby's place on the podium was far from secure though as Lee Johnston in 4th closed the gap between them, only 2 seconds behind at Ballaugh Bridge.

And by the Ramsey hairpin Johnston had snatched 3rd place from Oversby.

For the remainder of the circuit Herberston maintained a comfortable lead, and passed the finishline 10 seconds faster than Coward. The fight for 3rd though saw Johnston secure his place with 16 seconds to spare, 1 minute 52 seconds behind Coward.