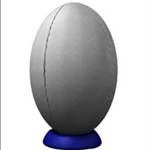 In Rugby's South Lancashire and Cheshire Division Two, all the Manx sides play their game in hand.

Douglas will be looking to close the gap on leaders Sefton to one or two points.

That depends on their margin of victory against relegation struggler's Marple at Port-e-Chee.

There's another Manx derby at Ballafletcher.

Vagabonds play Ramsey with the northerners now bottom of the table after a five point deduction for fielding an ineligible player in an earlier game.

Vagabonds could climb from sixth to fourth place if they record only their second home win of the season.

There are also two matches in the Manx Shield - the third between Ramsey "B" and Vagas "B" has been postponed.