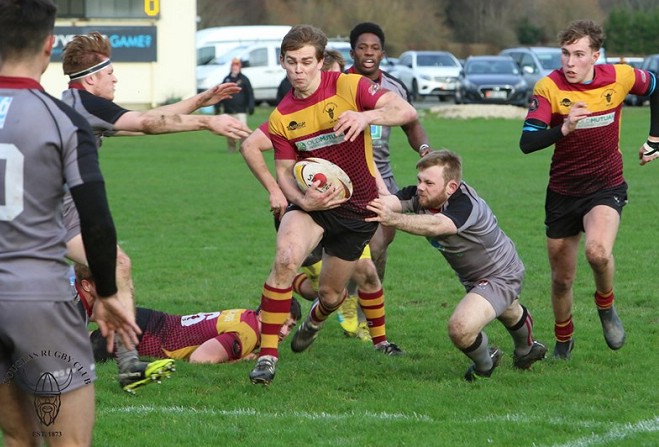 Douglas North were confirmed as Manx Trophy Champions thanks to an unlikely Friday night draw and an emphatic 58-0 win against Southern Nomads at Port-e-Chee.

The drama started on Friday night at Ballafletcher when North’s nearest challengers Vagabonds and Douglas South fought out a 12-12 draw in awful conditions. Douglas led 12-7 at half time with tries from Owen Carvin and Sam Games plus a Will Cain conversion. Mark Oldfield was on target again for Vagabonds with Luca Simmons converting. While Douglas had their chances in the second half, the only score came at the other end courtesy of Joe Louw at the back of a powerful Vagas scrummage. The result meant that Douglas’ North team could win the Trophy if they beat Nomads with a bonus point and they did just that.

While Nomads had the better of the opening exchanges, Douglas always had an extra gear to select when needed and they led 22-0 at half time thanks to tries from Niall Killey, Callum Dentith (2) and Craig Martin plus a Jack Shimmin Conversion. In the second half Kyle Martin went in, twin brother Craig went in for his second, as did busy number eight Killey and there were also tries from Karl Evans, and Tom Coleman.

Vagabonds Hornets slipped up at Poulsom Park losing 28-12 to Castletown and this defeat coupled with an Emerging Nomads 55-19 defeat of Western Vikings saw Nomads go clear at the top of the table. Castletown led 14-0 at half time with tries from Jim Emmett and Kunal Patel both of which were converted by Emmett. Peter Crowe crossed twice in the second half with Emmett again converting for a 28-0 lead. Vagas struck twice late in the game with scores from Ben Swindlehurst and Mitch Wells, but it wasn’t quite enough.

Emerging Nomads were on top from start to finish at Ballkilley with tries from Arthur Torin (2), Tom Davies (2) and Jake Walmsely (2) with one apiece from Mike Quayle, Ste McHugh and Keiran Maddrell with Patrick Kinvig adding five conversions. Nomads play Hornets next week and a win will give them the title.

At the Mooragh Park Ramsey B made it six wins on the bounce with a 91-49 defeat of Vagabonds Ladies in the tag variation of the game. The Richmond brothers Jake and Dan led the way for Ramsey with eight tries between them, five for Jake and three for Dan. Wing Ben Pickett also ran in three as did Conor Goodall and there was a single try from Darragh Pilkington. Messrs Goodall, Richmond and Richmond also kicked a conversion each. Lauren Ellison, Archie Callaghan and Kirsty McNab all ran in two each for Vagas with single tries from Maise Murray and Alanna Pritchard with Jo McCabe on kicking duties.