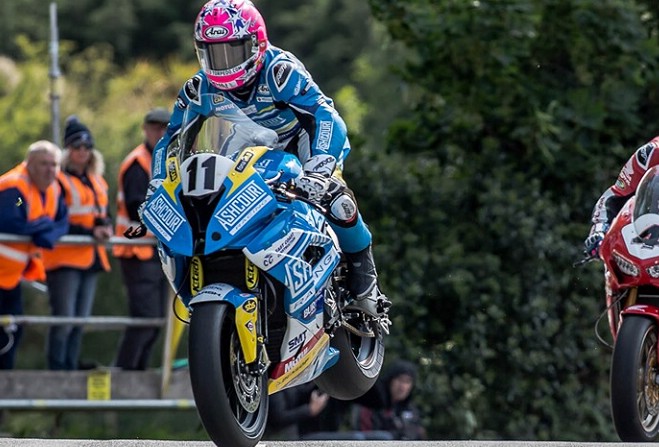 Ulsterman wins Supersport race ahead of Hillier and Hickman

Ashcourt Racing's Lee Johnston finally broke his duck at the Isle of Man TT as he rode to a maiden victory in Monday evening's Monster Energy Supersport Race 1.

The race was declared after two laps due to poor weather around the Mountain Course, with the Yamaha rider 3.64 seconds ahead of nearest rival on the road, James Hillier.

Peter Hickman - who had already tasted success in the opening RST Superbike race earlier in the day - made it a double podium day on the opening race day of the event by finishing third.

It's Johnston's first win in 35 races at the TT, having made his debut seven years ago in 2012.

He had previously spoken of what he considered his 'disappointing' performances at the TT in his career to date.

However, Johnston etched his name into the history books by claiming his first ever triumph in the Supersport contest, where he posted a 126.87mph lap to see off the fierce competition out on the track.

After the opening lap there was just nine seconds covering the top five riders, but it was Johnston top of the pile throughout.

Clerk of the Course Gary Thompson called an end to the race after two laps due to the deteriorating weather conditions, including rain in the west of the Island.

An emotional Johnston spoke to Isle of Man TT Radio after the race, where he paid tribute to his father who passed away in 2016: