FC IoM and Cammell Laird to face off in cup final 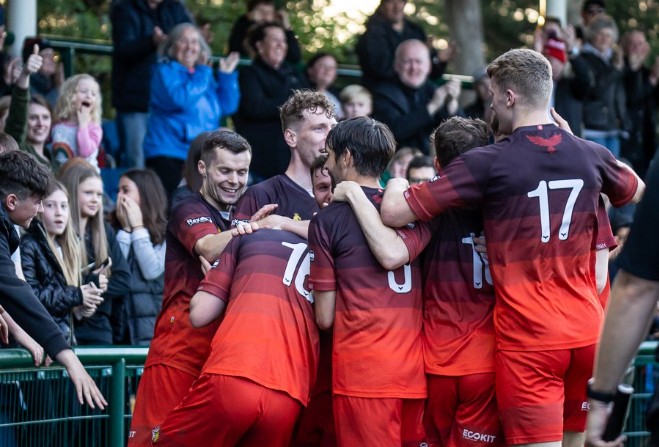 Both sides vying for cup glory in final game of season

FC Isle of Man will be hoping to secure silverware in their final game of their first ever season when they face Cammell Laird in the First Division Challenge Cup Final at The Bowl tomorrow (21 May).

The Ravens will go into Saturday afternoon's clash on the back of eight consecutive victories in all competitions and still just one loss to their name in 2022.

However they come up against a Cammell Laird side who've enjoyed a stellar spell towards the end of the season, having lost just one of their last ten games.

The Wirral-based outfit will also be contesting their third cup final of the season.

After winning the Wirral Senior Cup with a 3-0 victory over Heswall on 23 April, they've since contested the final of the Macron Cup last Saturday (14 May) where they eventually went down 5-0 to NWCFL Premier Division side Charnock Richard.

FC Isle of Man vs Cammell Laird takes place on Saturday, 21 May, at The Bowl - kicking-off at 3pm.

Manx Radio will be providing full live match commentary of the clash on our AM1368 and Digital platforms.

So, what's the story between these two sides going into this huge final game of the campaign?

The Road To The Final

A mixture of youth and experience has been a part of FC IoM's cup runs throughout the campaign, and their outings in this particular competition - the First Division Challenge Cup - has seen the younger Ravens players taking their chance to step up to the test of facing opposition already playing at the same tier as the Manx club in the league.

FC Isle of Man's journey in this competition began on 9 March - after receiving a bye in the first round, FC IoM entered the second stage of the competition away against Cheadle Town with late goals from Nathan Cardy and Ronan McDonnell giving the Manx side a 2-0 win.

Over a month later, on 18 April, the Ravens were on the road again to face a tough challenge at Sandbach United - just two days after FC IoM secured promotion in the league.

The Ravens came from behind in Cheshire to beat Sandbach United 2-1 with McDonnell on the scoresheet again alongside Jamie Corlett.

Onto the quarter-finals, and FC IoM visited Lancashire to take on AFC Darwen - after trailing 1-0 at half-time the Ravens rallied back to a commanding 4-1 victory thanks to a double from Ste Whitley and finishes from Nathan Cardy and Adam Cooil.

Through to the semi-finals, and FC IoM took part in their first cup tie on home soil of the season against the dangerous Holker Old Boys.

Once again, the Ravens had to fight back from trailing 1-0 at half-time where an equaliser from Jamie Corlett and a dramatic late winner from Cardy secured the Island team a home tie for this weekend's final

'Lairds' have navigated their way through a hectic set of cup campaigns this season - having taken part in five knockout competitions outside the league compared to FC IoM's three.

Their journey in the First Division Challenge Cup started back 9 April - having also received a bye in the first round, they then faced fellow NWCFL Div 1 South side, Barnton, in the second round.

Penalties in each half converted by Kieran Hamm and Jay Harvey saw Lairds progress with a 2-1 win.

A week later on 16 April they were then due to face Stafford Town in round three, however the game was unable to take place and the Wirral side were awarded a home victory.

By the time Cammell Laird's quarter-final tie against Wythenshawe Amateurs came around on 5 May, they were still also balancing the matter of progressing to the semi-finals of the Macron Cup.

But that didn't stop Lairds producing a sensational comeback away at Hollyhedge Park - after being 2-1 down after 45 minutes, Harvey scored twice in the second-half to complete his hat-trick followed by a stoppage-time finish from Kieran Frost to earn a superb 4-2 win.

Just five days later Lairds were thrust back into the competition again for the semi-final stage against Yorkshire-based Ilkley Town.

After a 2-2 draw in normal time at the Prabhu Ventures Ltd. Arena - the Wirral outfit earned their place in the final in dramatic style by winning 5-4 on penalties.

The first time these two sides locked horns was in the early stages of the NWCFL Div 1 South season back on the 4 September, 2021, at the Prabhu Ventures Ltd. Arena.

On that day, it was FC Isle of Man who set down a big marker with a thumping 6-1 win over 'The Shipyarders' - Luke Murray bagged a brace along with goals from Ste Whitley, Jack McVey and Dan Simpson as well as an own goal with the consolation for Lairds coming from Cameron McGregor.

However, it was a very different story when the two teams met again on Manx shores on 12 February this year.

A well-organised and intense Cammell Laird held FC Isle of Man to a 0-0 draw at The Bowl on a weekend where the Ravens were juggling the matter of having to play two games in two days.

Cammell Laird remain the only team this season to prevent FC Isle of Man from scoring at The Bowl.

Over the wider league season, both sides had contrasting campaigns - whilst FC Isle of Man secured second in the table and promotion via the play-offs, Cammell Laird meanwhile finished 14th in the standings on 43 points, comfortably clear of the relegation zone.

Meanwhile, in the First Division Challenge Cup alone, not much separates the two teams statistically.