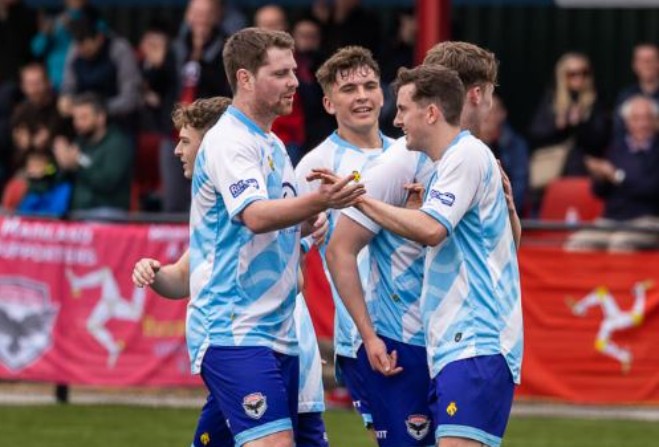 Winner will secure home tie in the last two

FC Isle of Man will be hoping to secure a cup final place when they take on Holker Old Boys at The Bowl this Saturday (7 May).

The Ravens are back on Manx shores this weekend when they host their opponents from Barrow-in-Furness in the semi-finals of the First Division Challenge Cup.

The winner will secure a home tie in the final of the competition, which is currently scheduled for Saturday, 14 May.

For the Manx side, the tournament has been a platform to allow some of the younger members of the squad to test themselves against opposition from either the NWCFL Div 1 South - which FC IoM earned league promotion from this campaign - or the NWCFL Div 1 North.

It's currently expected the policy of youth and rotation will continue again this weekend whilst many of the senior players who took part in the league season are earning rest time from their endeavours.

The road to the semi-finals

For FC Isle of Man, their journey began in round two of the competition when they came up against fellow NWCFL Div 1 South side, Cheadle Town on 9 March.

The Ravens emerged victorious at the Park Road Stadium with late goals from Nathan Cardy and Ronan McDonnell securing a 2-0 win.

Fast-forward to 18 April - two days after the club secured league promotion - and another rotated Ravens team came from behind to beat fellow NWCFL Div 1 South outfit Sandbach United 2-1 in Cheshire thanks to goals from McDonnell and Jamie Corlett.

Following that, FC IoM then faced another stern test earlier this week on Monday, 2 May away to NWCFL Div 1 North side AFC Darwen where an inspired second-half display saw the Island team fight back from 1-0 down to win 4-1 courtesy of goals from Cardy, Adam Cooil and a double from Ste Whitley to reach the semi-final phase.

Now, the Ravens face a huge test this weekend against a Holker Old Boys side who've enjoyed a strong season in NWCFL Div 1 North.

The Cumbrian outfit finished second in the division and narrowly missed out on promotion after losing 2-1 in extra time to Golcar United in the division's play-off final.

In this cup competition, Holker Old Boys started strong in the first round with a comprehensive 3-0 victory at home to Cleator Moor Celtic on 22 February with goals from Patrick Allington, Brandon Collins and Jason Walker.

Their encounter in the second round was a slightly closer affair, as Holker Old Boys edged to a 2-1 win over Daisy Hill on 7 March with Collins and Joshua Woodend on the scoresheet.

After that, their third round tie against Atherton LR was also another close contest on 23 April, but a Collins double and a strike from Jamie Hodgson secured a 3-2 victory for the Cumbrian side.

Then a week later (30 April), the entertainment rose once more as Holker Old Boys ran out winners in a seven-goal thriller against Ashton Town - Two more goals from Collins and finishes from Joe Amison and Samuel Joel earning a 4-3 win to confirm their place in the semi-finals

FC Isle of Man vs Holker Old Boys takes place at The Bowl this Saturday (7 May), kicking-off at 6.30pm.