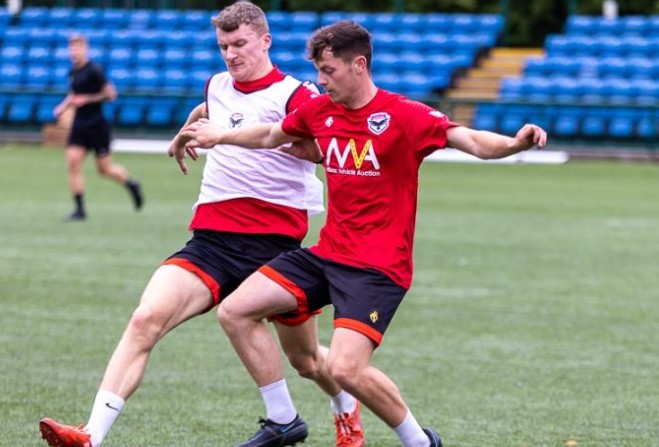 FC Isle of Man will be expecting a stern test when they travel to face Vauxhall Motors in the NWCFL Premier Division this Saturday (20 August).

The Ravens will travel to the vanEupen Arena to take on their Wirral-based opponents with the contest kicking-off tomorrow at 3pm.

The Manx side will be hoping to build on back-to-back victories in their last two outings in the league against Litherland REMYCA and Ashton Athletic.

Meanwhile, Vauxhall Motors have had an impressive start to their campaign, winning all four of their league contests so far, including a 2-0 victory at home against West Didsbury & Chorlton this week (16 August).

Tomorrow's match will be FC Isle of Man's first of four away games in the space of ten days.

Manager, Chris Bass, says he expects nothing less than a significant challenge facing his side this weekend:

The Ravens defensive unit of Alex Maitland and Sean Quaye are joined this weekend by Ash Higginbotham whilst Jamie Corlett will continue his return from injury.

In midfield, the Manx side are boosted by the returns of Adam Mealin and Charlie Higgins this weekend, however options in attack remain limited at this time due to the long-term injury to Sean Doyle whilst Furo Davies is unavailable.