On Air Night Flight | Midnight - 5:00am
Monty Python - Always Look On The Bright Side Of Life Download 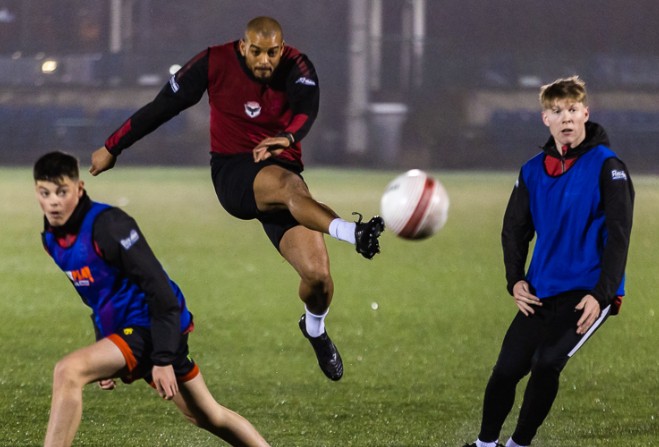 Both sides played out entertaining draw back in September

FC Isle of Man will be hoping to add more points after a well-earned victory last week when they face Barnoldswick Town in the NWCFL Premier Division tomorrow afternoon (3 December).

The Ravens travel to the Silentnight Stadium on the back of a 2-1 win over Charnock Richard in the league last time out.

Back in September, FC Isle of Man and Barnoldswick Town played out an entertaining 3-3 draw at The Bowl.

The Manx side currently sit 18th in the table on 20 points, still eight points clear of the relegation zone.

Interim manager, Paul Jones, says he's confident in his side's ability to get a result this weekend, but it will be no easy task:

FC Isle of Man's victory last weekend saw them end a run of three defeats on the bounce in all competitions.

They have two wins from their last six, with one draw and three losses.

Victory this weekend would take them level on points with their upcoming opponents.

Meanwhile, Barnoldswick Town sit three points and one place above FC Isle of Man in the table, having played one game less so far.

A recent boost in form for the Lancashire club has seen them take four wins from their last six matches in all competitions.

They will, however, be looking to bounce back from defeat in their most recent league clash which saw them beaten 3-1 away at Kendal Town on Wednesday night (30 November).

Barnoldswick Town vs FC Isle of Man takes place at the Silentnight Stadium this Saturday, kicking-off at 2pm.

Paul Jones names an almost identical squad this weekend from the side which overcame Charnock Richard last weekend.

Only Jamie Corlett and last week's match-winner Dan Simpson drop out as both are unavailable.

However, Karl Clark returns in defence with Adam Mealin also called up once more to bolster the midfield options.

Youngsters Tom Creer, Morgan Naylor and Dominic McHarrie-Brennan are also among those who keep their places from last Saturday.