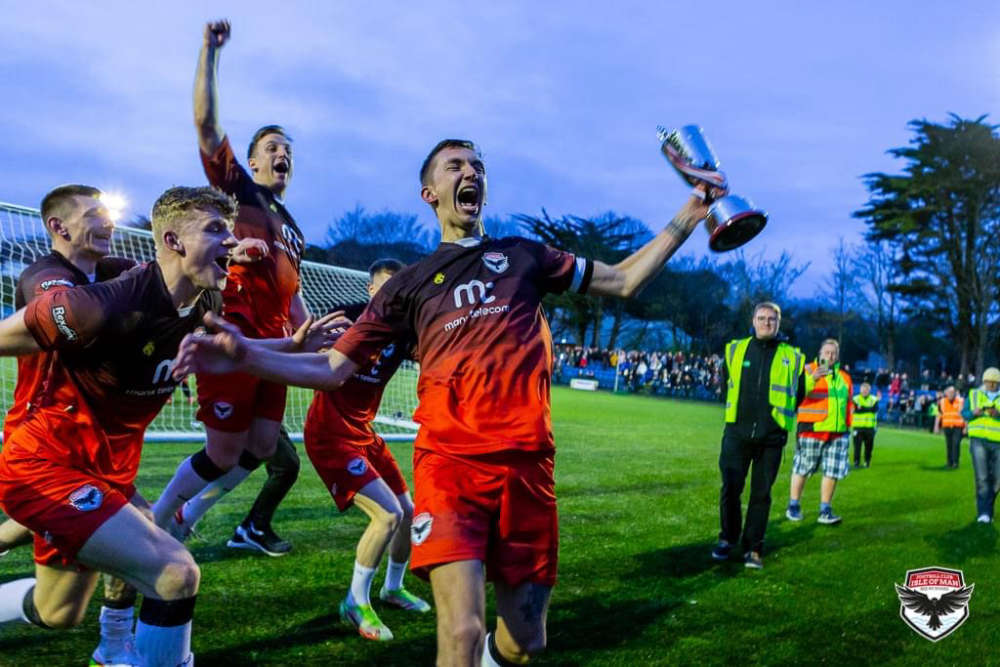 FC Isle of Man have been promoted in the club’s first ever league season after a historic 4-2 win over New Mills at The Bowl tonight (16 April).

The Ravens and ‘The Millers’ stepped out in front of a 3,200-strong crowd for the NWCFL Div 1 South play-off final, with the victor knowing they would be playing their football in the NWCFL Premier Division next campaign.

The opening exchanges of the match saw both sides taking a fairly cautious approach, with neither wishing to give the other any major opportunities.

The first real chance of the game fell to New Mills’ Benito Lowe who skipped a challenge into the left of the FC IOM box but could only fire his goal-bound effort straight at onrushing Ravens ‘keeper, Matthew Quirk.

With the visitors enjoying plenty of possession in the FC IOM half for most of the opening period, the Manx side then stunned their opponents by taking the lead on 26 minutes.

New Mills failed to clear a long throw from FC IoM’s, Dan Simpson, from the right and the subsequent scramble in the six yard box fell to the feet of Chris Bass jnr. who poked a low, deflected effort from close range into New Mills ‘keeper, Dylan Forth’s, bottom right corner to trigger huge home celebrations.

But just 60 seconds after the restart, The Millers were back level when FC IOM failed to deal with a bouncing loose ball on the edge of their penalty area, and alive amongst the chaos was Kyle Oakes who trapped the ball around 12 yards out and slotted a calm finish into Quirk’s bottom right corner.

After an impressive overall first half performance, New Mills then took the lead for the first time on the stroke of half-time, when a clever low corner from Darren McKnight found the feet of Lowe who, unmarked on the edge of the box, scooped a curling right-footed effort past a motionless Quirk into the top corner to make it 2-1 to the away side.

Into the second half, and FC IOM came out asking a few more questions in attack, and levelled things again eight minutes in when Sean Quaye met a Simpson corner from the left from two yards out to power into the net.

With their tails up, the Ravens then put themselves 3-2 up five minutes after that on 58 minutes, when Simpson provided again with another long throw, this time from the left flank, and Luke Murray rose highest from six yards to nod across Dylan Forth into the goalkeepers’ bottom left corner, triggering wild celebrations amongst the home support.

The best goal from the hosts was yet to come, however, as Bass jnr., with 68 minutes gone, controlled a cut-back from Simpson on the left edge of the New Mills box before firing an unstoppable left-footed drive into the top corner past the stranded Forth to make it 4-2.

With a two-goal deficit to now overcome, New Mills job to get back into the contest got more difficult on 77 minutes when Millers substitute, Richard Tindall was shown a straight red card for reacting badly to a challenge in the middle of the park by FC IoM’s Ste Whitley.

Despite a valiant push in the final stages, 10-Man New Mills couldn’t find the killer touch to bring the tie back into their reach and test Quirk in the Ravens goal.

With four minutes of second-half stoppage time played, referee, Dan Hooten then brought the game to a close, triggering a monumental eruption of celebrations from the thousands of home fans in attendance.

The victory means FC Isle of Man are promoted and will play in the NWCFL Premier Division in the next league campaign.

The Ravens’ next match is away at Sandbach United in the First Division Cup on Easter Monday (18 April), kicking-off at 1.45pm.