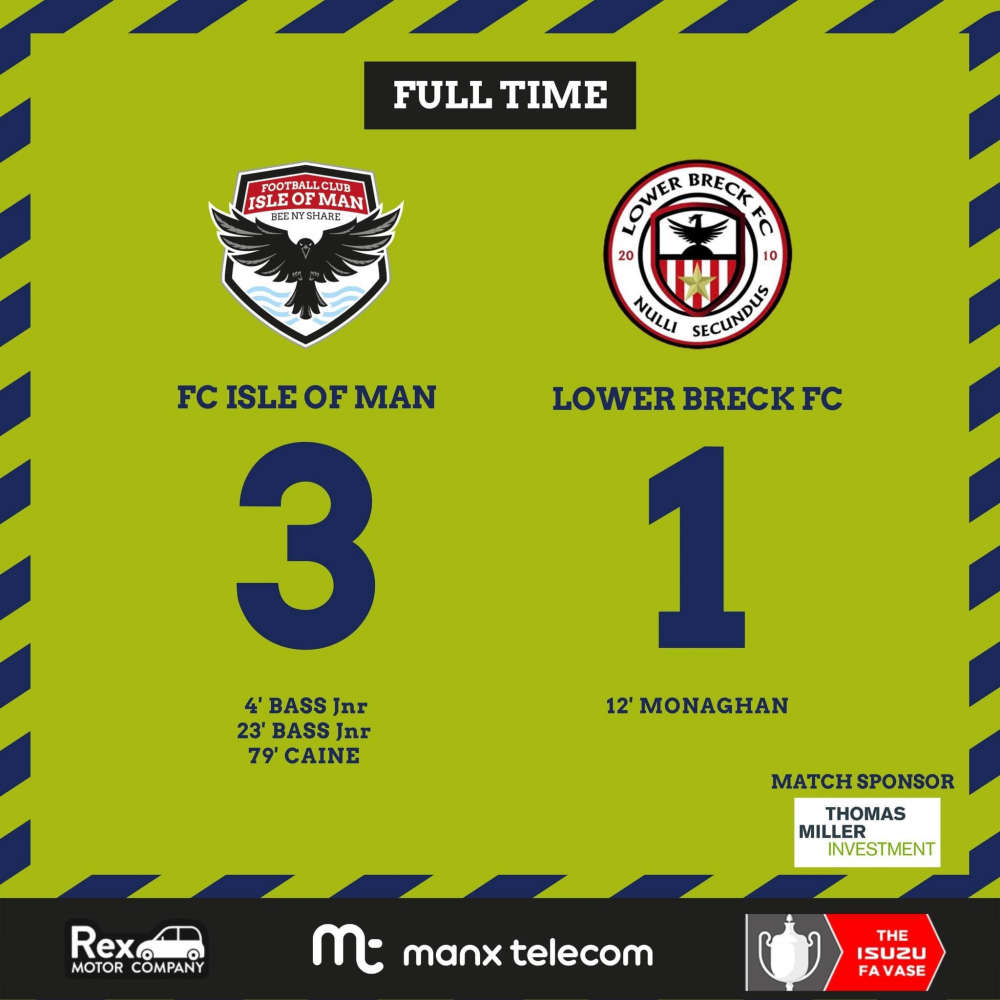 FC Isle of Man secured their first win in over a month this evening (24 September) as they beat Lower Breck 3-1 at The Bowl to progress in the FA Vase.

Both teams met on Manx soil for the second qualifying round of the competition with the Manx side hoping to avenge their 1-0 defeat to their opponents on home turf in the NWCFL Premier Division back on 30 July.

The first half of this evening’s contest was played at a breathless pace and FC Isle of Man drew first blood around six minutes in when Ste Whitley’s cross from the right found Chris Bass jnr. at the back post to tap in past Lower Breck goalkeeper, Theo Roberts, from close range.

The Merseyside visitors responded well to going behind and were level on 12 minutes when Lower Breck striker, Jawad Jebrin, was bundled over in the FC IOM penalty area with referee, Bradley Thompson, pointing to the spot.

Up stepped Jamie Menagh who emphatically converted his spot kick in off the crossbar, sending Raven’s keeper, Matthew Quirk, the wrong way in the process.

The intensity and desire from both sides was on show in the opening 45, and FC IOM retook the lead in the 23rd minute as Bass jnr. got his second of the game as he once again met a cross from the right at the back post and directed a superb diving header into Theo Roberts’ bottom right corner from around six yards.

While the hosts lead 2-1 come half-time, it was Lower Breck who started the second period brighter, controlling possession but struggling to test Quirk in the Island side’s net.

In a second 45 of fewer clear cut chances, the intensity from both sides refused to drop as both searched for the next crucial blow in the contest.

Among the big shining lights throughout the contest was young FC IOM midfielder and eventual man of the match, Tiernan Garvey, who found himself in the midst of an entertaining midfield tussle with the impressive Lower Breck duo of Thomas Williams and Stuart Crilly.

With around 10 minutes to go, it was the Ravens who then broke through with a decisive third goal when substitute Luca Moretta broke free down the left wing to the byline before fizzing a low pass across the Lower Breck six-yard area to find Sam Caine at the near post who blasted a low effort into the bottom left corner to make it 3-1.

The win means FC Isle of Man progress to the first round proper of the FA Vase, which is scheduled for Saturday, 22 October - the draw for the next round is still to be confirmed.

The Ravens next game will see them return to league action in the NWCFL Premier Division on Saturday, 1 October away against Charnock Richard, kicking-off at 3pm.

Man of the Match: Tiernan Garvey (FC Isle of Man)