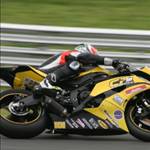 Cal Cooper moved up to sixth place overall in the BSB 600 Superstock Championship after a gutsy podium-earning ride at Oulton Park on Sunday.

The 17 year-old from the Isle of Man fought back from a monster crash in Saturday evening’s warm-up session, which saw his CF Motorsport Yamaha take a big battering, to come home third in the race.

The team spent a total of 30 man hours re-building the bike so Cooper could take his place on the front row of the grid after he qualified in second position.

A mystery electrical problem in free practice on Friday denied Cooper even one lap of the 2.6 mile circuit and, in the first qualifying session later in the day, he could get the R6 no higher than 24th, nearly three seconds off pole pace.

However an overnight ‘cure’ saw Cooper, who is supported by the IoM Sport Institute, Dean Teversham Roofing of Dorset and Paul Dedman Performance, back to his and the bike’s best and just 0.1 off pole, which went to the championship leader.

With the normal race day 10-minute warm-up session taking place on Saturday evening because of Oulton’s Park’s Sunday usage restrictions, Cooper was perhaps over keen to maintain his momentum and he went down heavily at Druids, the Yamaha cart wheeling into the barriers.

Said Cooper: ‘I hit a false neutral and the bike just went from under me. I hurt my shoulder and knee, so the race was difficult for me. The track physio was terrific and I also had my shoulder taped. Race control let me have a couple of laps to check out the bike, which felt totally different to “my bike”, not surprising considering how the team had had to repair it.

‘The front brake went off in the race as we knew it possibly would and I also had problems with the rear tyre, which made corner entry dodgy. Getting third was a bonus as I had dropped to fourth very late on. But that’s racing and I think we deserved a bit of luck.

‘I can’t thank the team enough for what they did, they were absolutely amazing and so dedicated to getting me back out there. I wasn’t the only one in trouble as my team-mate, who rides in the Supersport class, crashed in qualifying and broke a scapoid, so it was one hell of a weekend for them.’