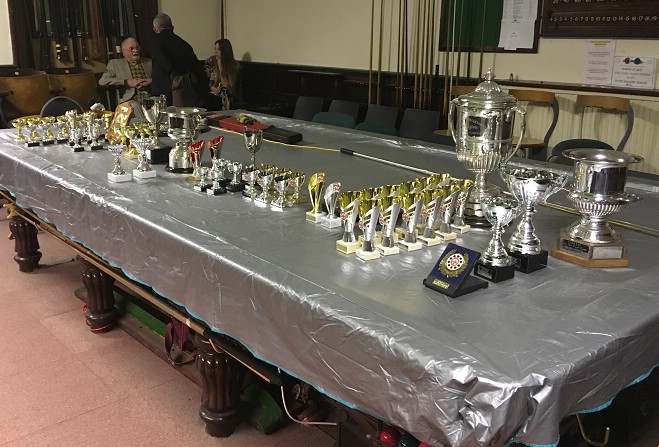 Tight at the top as snooker league enters final throes

Steve Finnegan starred with breaks of 32 and 25 in his victory over Jimmy McDaid, and there were also wins for Steve Oates and Peter Kirkham, who had a break of 20.

Tom Miller had a break of 34, but couldn’t catch Jamie Wilson who also had a 27 in a high standard frame – the home side’s other win came from Zain Abideen against Pete Crellin.

It was another high scoring affair in the south, as Port St Mary Legion defeated the visiting St Olaves 3-2.

Phil Joynes had a break of 24 for the hosts but lost to the league’s top individual James Kerr, who had a 34 – Port St Mary’s wins came from Dave Pickersgill, Shaun Roberts and Terry Boyle.

Sean Corkish was the other winner for St Olaves, with breaks of 32 and 23 – Dan Crawley also had a run of 24 but couldn’t make up the deficit against Boyle.

Finch Hill ‘Musicians’ kept up their title challenge with a 3-2 win against Finch Hill ‘Rockets’ – their wins came from James Hynes, Matthew Dodd and Lee Hunt, with Graham Ashton and Ken Kinrade winning for the ‘Rockets’.

The only break of note came from John Kennish, with a 24, but he suffered a rare defeat against Ashton.

Finch Hill ‘Young Guns’ also kept themselves in the mix on the adjacent table, with a 3-2 win against Peel Legion.

Peel twice went ahead, through Mike Crook and Geoff Hall, but Dollin Mercer, Brendan Clague and Nick Stephens fought back for the ‘Young Guns’ to seal an important comeback – Mercer’s 29 the only break of note in that tie.

In Ballasalla, Malew 1 were beaten 3-2 by Douglas Snooker Club ‘Hurricanes’ – their wins came from Tony Cubbon and Roy Gelling to put them 2-0 ahead, but Chris Dagnall (23), Gary Conwell and Steve Munk (24) turned the tie on its head.

Back at Douglas Snooker Club, the ‘Wannabes’ were beaten 3-2 by Malew 2.