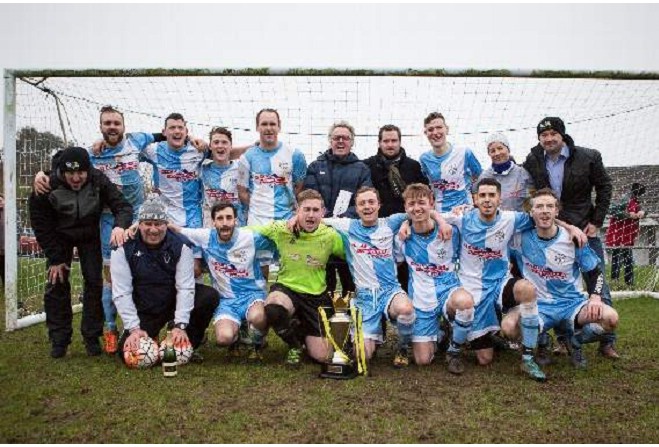 Manx football’s top team showed exactly why they are number one on Saturday.

A hat-trick from Ciaran McNulty, plus goals from Callum Morrissey and Joey Morling, sparked the title celebrations and ensured the champagne wasn’t on ice for long.

The Saints had battled hard but the 57th minute dismissal of James Murphy gave the Geordies extra impetus as they scored four times in the final 24 minutes.

Mike Williams, Jamie Johnstone, Steve Ridings (two) and Jack Saxon got the goals in a 5-3 success.

Darren Shiels, Daniel Sherry and Will Penhullerick scored for Athletic who had led early on.

Corinthians maintained their hopes of securing the runners-up spot with a 7-1 win at strugglers Colby.

Old Boys produced a good showing to leapfrog St John’s in the table.

That’s after a 4-0 win over the westerners at Blackberry Lane, courtesy of goals from Chris Coxon (two), Craig Murphy and Gary Quirk, which moved them up to fifth.

Ramsey earned a fine point by holding Laxey to a 2-2 draw.

A Lewis Qualtrough double ensured they returned north by moving up into 10th place.

Sean Gavin and Dave Reynolds found the net for the Miners.

Union Mills suffered a major blow in their bid to beat the drop as they were held to a 1-1 draw by already relegated Ayre United.

The result means it’s increasingly likely the Millers will join the Tangerines in Division Two next season.