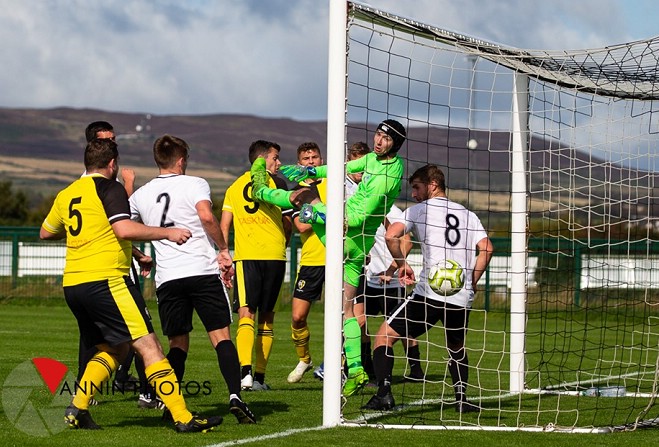 St Georges start with away win at Corinthians

St Georges took all three points from their opening day encounter away at Corinthians on the first day of the new Manx football season.

A first half Johnny Myers penalty and Maleigh Freestone's second half strike either side of a Matthew Quirk own goal saw them run out 3-1 winners at Ballafletcher.

There were resounding wins for St Marys and Peel against the Canada Life Premier League new boys.

Dan Hattersley scored five for The Saints - and even had a penalty saved - as they won 9-0 away at Pulrose.

Lee Gale netted his 250th goal for Peel with the first of a brace as the Westerners won 5-0, with teammate Rhys Oates also helping himself to an opening day hat-trick.

DHSOB got off to a nightmare start as they were thumped 7-1 by Laxey at Blackberry Lane.

Luke Strickett-Morling starred with four goals and Will Berquist also had his scoring boots on with a hat-trick.

St Johns adjusted well to life in the second tier with a 2-1 win away at Union Mills as they look to bounce back to the Premier League at the first attempt.

There were goals galore at Station Fields as Colby christened the opening of the new Roy Dixon Stand with a 14-1 mauling of Governors.

Carl Hickey gave himself a headstart in the goalscoring charts with a remarkable eight goals, and there were two each for Jordan Primrose-Smith and Ste Collister.

A nine-goal thriller between RYCOB and Ayre saw the former prevail 5-4 and Malew left it late to beat Gymns 3-2.

Nothing could separate Foxdale and Braddan who played out a 2-2 draw, meanwhile Michael scored a last-gasp equaliser in a 1-1 stalemate with Douglas & District.