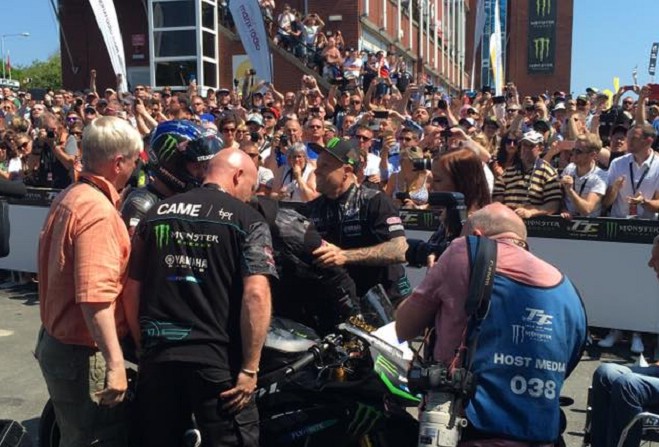 Ian Hutchinson is mobbed by his team in the winners' enclosure

Ian Hutchinson has won the Monster Energy Supersport 1 race, his third consecutive victory in the class.

The Bingley Bullet did the Supersport double last year.

All three wins have been for Keith Flint's Team Traction Control, the team's first three races at the TT.

Monday morning's race was another battle between the two form riders at TT 2016 - Hutchinson and Michael Dunlop.

Whereas Dunlop used the first couple of laps to establish a commanding lead in Saturday's Superbike race, today it was Hutchinson who flew out of the traps, getting 10 seconds ahead of his rival by the end of the first lap.

Coming out of the pits at the end of lap two, he had almost doubled that lead to 18 seconds, although it was back down to about 10 seconds by Ramsey on lap three.

The gap remained around that for the remainder of the race, allowing Hutchy to claim his 12th TT victory in a new race record time.

It was also Hutchy's seventh win on a 600cc machine, extending his record in the class.

Speaking to Manx Radio TT in the winners' enclosure, Hutchy said there was clearly something he liked about his 600: