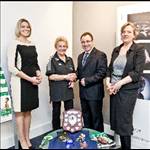 The names of 23 Manx residents chosen to carry the Olympic torch through the Isle of Man in the run-up this summer's Olympic Games have been announced.

The torch will arrive in the Island on June 2 on its tour around the United Kingdom. A team of torch-bearers will carry the Olympic flame through Castletown, Ballasalla, Douglas, Onchan and Laxey, on the first race day of TT 2012.

Nominations from the public were invited between March and June 2011 in an initiative involving the London Organising Committee's presenting partners Lloyds TSB, Coca Cola and Samsung.

More than 7,300 inspiring people have been chosen to carry the torch on its 8,000 mile journey, when it's expected to pass within 10 miles of more than 95 per cent of the population.

Mo Sherring has been involved with Riding for the Disabled since the mid-1970s and is chairman of the Isle of Man Special Olympics Committee.

Mo is both surprised and thrilled: