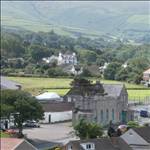 Sinclair was buzzing with activity in the cool conditions.

Everyone was aware that wind would be a problem, but this did not appear to affect the junior grand prix competitors.

The monthly handicap was an extremely close match at the top, with just one or two points separating the first 13 competitors.

Just missing out in second place was Laxey man John Wood with 594, and in third position, Mark Cain with 590 having scored one of the very few '98s' on the day.

At the end of the morning the Olympic Final gave Ashley Gardner a win of 101.3, with Wood once again coming in second with 100.3.

The Junior Grand Prix was another closely-fought match with the win going to Ben Kelly returning 560 from Nick Cook on 559.

Monday evenings' competitions were the usual Osborn Carpets 600 and The Empire Garage Shield Handicap but also incorporated this week, round one of the IOM Rifle Associations' Jamaica Trophy.

The Osborn 600 once again gave Harry Creevy a resounding win with an excellent 592 x 600, leaving Ashley Gardner four points further back on 588, very closely followed by Peter Quirk on 587.

With 19 shooting it is nice to see an increase in competitors from previous weeks but there are still spaces left for others to compete.

The winner of this week's medal was Ashley Gardner (Snr) returning 609, very closely followed by Mark Cain just one point behind on 608 from last week's winner, Steve Callus, on 605.

The first round of the Jamaica Trophy was a success for Harry Creevy on 592, followed by Ashley Gardner with 588 just a single point from Peter Quirk on 587.

This is a six round competition and will be completed over the next six Mondays, except Monday, June 27, as several shooters will be competing at the Island Games.