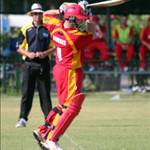 The Isle of Man cricket team has been crowned ICC European Division Two champions after a convincing victory over Sweden in Corfu today.

Promotion had already been achieved by qualifying for the final, so the side was playing for prestige, and also revenge, as Sweden had won the encounter between the two in the group stage earlier in the week.

Tight bowling by the Island restricted Sweden to 122-7 off their 20-over allocation, Mark Williams leading the way with 3-13.

Openers Stokoe and Gareth Morris then set about the Swedish bowlers, their partnership yielding 104 runs off the first 12 overs, before Stokoe was out for 33.

Morris was even more impressive, smashing 71 off just 41 balls, including five fours and five sixes, before he joined Stokoe in the pavillion just four balls and eight runs later.

Phil Littlejohns and Ollie Webster knocked off the remaining runs without much trouble, giving the Isle of Man an eight-wicket victory with just over five overs to spare.