Kennaugh and Co through with World Record 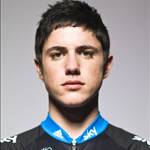 Peter Kennaugh and his team pursuit colleagues have stormed into tomorrow's first round at the Olympics.

They smashed their own world record as they easily recorded the fastest time in qualifying at the velodrome in London this evening.

Tomorrow the four - Kennaugh, Ed Clancy, Geraint Thomas and either Andrew Tennant or Steven Burke will face fourth-fastest qualifiers Denmark for a place in the gold medal race.

If Team GB get through they'll take on either Australia or New Zealand.

Here's the moment Kennaugh and co. set that new world mark earlier, as described by the BBC: