Kennaugh closes in on another title 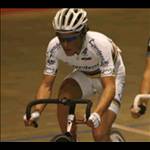 In-form Manx cyclist Peter Kennaugh has won the first two stages of the final round of the Peter Buckley road race series in Wales.

If he maintains his position at the top over the final stages, it will be Kennaugh's 4th British Championship in a week.

So far, he has secured gold in the road race, as well as claiming pursuit and points races on the track at the Newport Velodrome.