Kneen on song at Stars at Darley 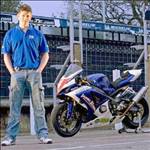 Dan Kneen was back in action at the weekend, contesting the annual 'Stars at Darley' meeting at Darley Moor and it proved to be a successful outing for the Manxman. Competing at the Derbyshire circuit for the first time since 2005, Dan put in a trio of impressive rides on the Marks Bloom Racing Suzuki GSXR1000 Superbike and was rewarded with fifth overall in the feature Stars event and a win in the club's Peak Cup Championship.

With perfect conditions at the circuit, located close to England's Peak District, Dan soon got dialled back into the 1.5-mile course and took 8th in qualifying for the Stars event, held over two 15-lap legs, just over a second adrift of the pole position time set by British Superbike rider Barry Burrell. Despite not making the best of starts in the first 15-lap race, Dan was soon up into seventh place and enjoying a good dice for fourth with Honda TT Legends rider Gary Johnson, former Stars winner Richard Cooper and John Ingram. There was only two seconds between the quartet when the race was stopped on lap five after Michael Pearson crashed out and so Dan was awarded seventh place.

The second leg went the full distance and a better start saw Dan end the first lap in sixth place. By lap three he was up into fourth and although Cooper and Johnson briefly pushed him back down to sixth, he fought his way back up to fourth and successfully kept Johnson at bay for the remainder of the race. Fourth and seventh meant Dan finished in fifth place overall, only beaten by the Buildbase BMWs of British Superbike riders Burrell and Peter Hickman and the Honda TT Legends machines of Johnson and John McGuinness.

Speaking later, a pleased Dan said, "It's been a really enjoyable weekend and I've had a great time here at Darley this weekend. I've only ridden here once before and that was way back in 2005 when I was just starting out racing and that was actually my first race meeting off the Island so it was tough going to begin with this weekend as all the other riders race here year in year out. I soon got dialled in though and got quicker and quicker with each outing and my fastest lap in the second Stars race was only 0.04s slower than John McGuinness on his TT-winning Honda so I was well happy with that."

"It was a shame the first race got red flagged so early as we'd only just got going but I had a good run in the second although I could have been closer to McGuinness had Cooper not pushed me wide at the hairpin early on. Gary Johnson managed to get by as well but I fought back and overtook them again although by that time John had made a break. I was happy with fourth place though as the competition was very strong. I also had a good run in the Peak Cup race, which I mainly used to try a few things out on the Superbike and having missed a couple of months of racing after my TT crash, it's good to end the season strongly and with some good results."

Dan now heads to Brands Hatch where he'll contest the final round of the Metzeler National Superstock 1000cc Championship. The meeting takes place on October 12-14.