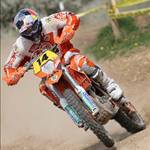 Manx enduro legend David Knight overcame a crash in the first heat to win round one of the British Enduro Championship at Saints Well, Powys, mid-Wales, over the weekend.

The defending champion bounced back on his KTM Factory 535 with his two fastest laps to take the lead in the third heat, which he maintained through to the end of the day to claim the round.

After the event Knighter said, "It reminds me of the first ISCA I ever did. A proper enduro. I enjoyed it. It was bloody hard."

There was more Manx succes in the under-23s, a one-two in fact.

Danny McCanney finished ahead of Alex Rockwell following a closely-fought battle between the two young Manxmen.

It's reported it would have been even closer, had Rockwell not still been struggling with a knee injury he picked up a couple of weeks ago.

On Sunday the second round of the British Enduro Sprint Championship was curtailed as the wet weather persisted.

Tom Sagar won two of the three heats they managed to stage, Knighter the other one, meaning Sagar won the round.