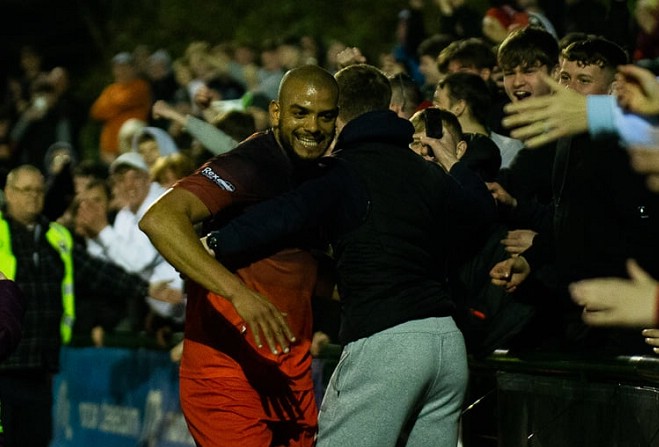 Going into the match, the Ravens knew a win or draw would be needed to take back second place in the NWCFL Div 1 South after play-off rivals Abbey Hey won during Saturday afternoon.

Furthermore, the other play-off contenders, New Mills and Wythenshawe Amateurs played out a 2-2 draw on Saturday, giving FC IOM an opportunity to extend their advantage in the remaining two regular league games.

Meanwhile, the visitors, Stockport Town, were hoping to end a run of seven games without a win in all competitions.

The Manx side struck the first blow on 12 minutes during a fast-paced start to the game when Chris Bass ragged the ball from Stockport Town captain, Geffry Ebhote, on the edge of the visitors’ penalty area and squared to Sean Doyle who easily tapped in from close range.

After that, however, much of the first half saw some shaky defending and poor passing from the hosts as a creative and intense Stockport Town upped their efforts in search of an equaliser.

The away team then got a reward for their good response with 32 minutes gone when Ravens defender, Ryan Burns, was judged to have handled the ball in the FC IoM penalty area from a deep cross.

Just five minutes after that, FC Isle of Man retook the lead when a free-kick out on the left from Dan Simpson whipped into the box was met by Sean Quaye from six yards out who rose ahead of Stockport Town ‘keeper, Joshua Schofield, to guide a header into the net.

A tightly-contested first half saw the Ravens lead 2-1 at the break, but two minutes after the restart Stockport Town grabbed another equaliser.

Tobias Green, who’d troubled the FC Isle of Man defence throughout the first period, fizzed a bullet free-kick from the right-hand edge of the penalty area over the wall, with the power on the strike taking it through the hands of Quirk into the roof of the net.

The nerves among the crowd at The Bowl were palpable for much of the second half following that - the visitors continued to press and frustrate FC Isle of Man, but couldn’t quite find the cutting edge to test Quirk again.

A cagey and scrappy second period hit boiling point on 89 minutes when FC IoM’s Chris Bass jnr. was sent off after reacting badly to a robust challenge on him from Stockport Town’s Keane Barugh.

But the true drama arrived in the 93rd minute when 10-man FC IOM were awarded a penalty in the dying seconds when Luke Murray was dragged down in the area following a Ste Whitley cross from the right flank.

After a delay, up stepped substitute Furo Davies from 12 yards who, with the tension at fever pitch, calmly slotted the spot kick into the bottom right corner to make it 3-2, sending Schofield the wrong way and triggering delirious celebrations from the home supporters.

The Ravens next and final regular league game before the play-offs begin will be at home against Abbey Hulton United next Saturday (2 April), kicking-off at 3pm

Man of the Match: Sean Quaye (FC Isle of Man)