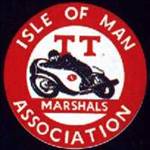 The Isle of Man T.T. Marshals Association has issued a strong statement confirming it's concerns over riders ignoring yellow flags during the past T.T. fortnight - it reads:-

The TTMA, wish to make the following statement regarding the use of the official race flags during the 2010 TT practices and races.
A considerable amount of correspondence, feedback and reports from concerned marshals, some race officials and riders, has been received by the TTMA regarding the serious lack of attention paid to flag signals by riders during practice and racing at the recent 2010 TT.
This mainly concerns the yellow danger warning flag which is displayed in a stationary manner or a figure of eight waved manner or a series of both stationary and waved flags, depending on the degree of danger present. The riders are fully briefed in what the flags mean and what is expected of them when they observe them being used in this manner. During the past couple of years directors of the TTMA have been present at rider’s briefings and during more recent events have conducted physical demonstrations and descriptions of all the race flags in a bid to reinforce the importance of riders taking notice of the flags.
It is therefore extremely worrying that some riders have been seen to not obey the yellow flag signals whilst approaching and riding through incidents, this is particularly dangerous as in many instances marshals are on the course dealing with the aftermath of such incidents and some riders are not slowing down at all and some are actually accelerating: long before the green flag is displayed which signifies the all-clear to continue at race speed. The TTMA considers this failing on the part of some riders a very serious issue and one that needs to be addressed in the strongest possible way.
Some marshals have made it clear they are withdrawing their services as a marshal should this matter not be dealt with and others have suggested a walk-out should they experience anything like it again. If the road races are to continue we must do everything we can to ensure we do not lose our valuable volunteers; the TTMA works hard and at some expense to recruit them and without them there will not be any races.
The TTMA understands that certain riders have been warned and one rider fined for his transgression; this however has not been made public, therefore no one knows that anything has been done. Furthermore the TTMA would like to receive a response to this statement outlining any actions intended, so that they can report back to the marshals.
For those who are unaware of these particular flag meanings/instruction to riders they are:
Yellow flag held stationary – Danger, slow down, no overtaking.
Yellow flag waved – imminent danger, slow down, no overtaking, be prepared to stop. It must be waved continuously in a figure of eight motion. Riders are subject to yellow flag restrictions until they pass a green flag
Green flag held stationary – course is clear to resume racing speed (only to be displayed after a yellow flag).

This press release may be used by any members of the media with the strict stipulation that it is used in its entirety.