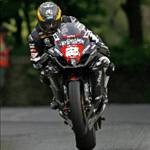 Ramsey racer Conor Cummins has secured three podiums at an international meeting - his first since his crash on the Mountain at TT 2010.

He claimed third places in the Supersport and both Superbike races at the Ulster Grand Prix at Dundrod.

The Padgetts Honda of Gary Johnson was second.

Michael Dunlop was challenging Guy Martin hard but slid off at the hairpin on the penultimate lap.

However, he did win the opening Superstock Race, finishing four seconds ahead of veteran rider Ian Lougher.

Cummins led into the first corner but ended up in fifth - Dan Kneen was seventh.

Brother William took the honours in the first Supersport event with the result declared after three laps when the race was stopped by a red flag incident.

Anstey reversed the earlier Supersport event ahead of William Dunlop and Cummins.

Ryan Farquhar took yet another Supertwin contest in a re-run to complete a North West 200, TT and Ulster treble. Ryan Kneen came fourth.

The other Superbike race was won by Michael Dunlop from Martin and Cummins.