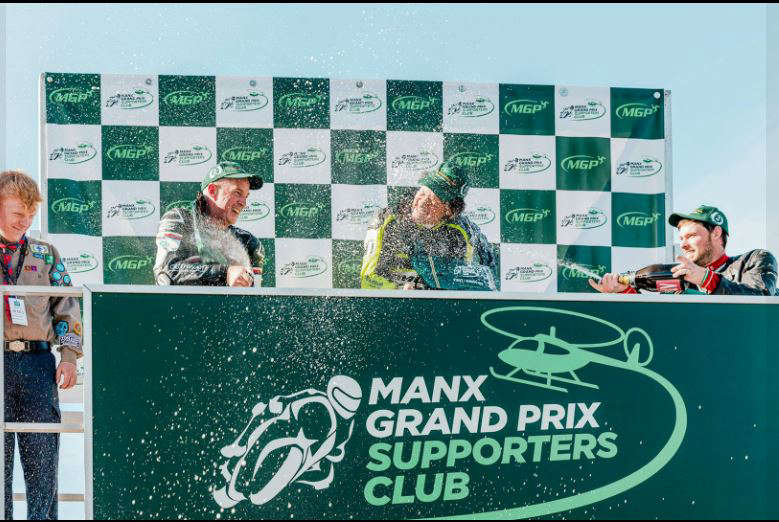 With a new lap record of 116.475mph, Francesco Curinga claimed the honours in Saturday afternoon’s MGP Supporters’ Club Junior Manx Grand Prix by almost twenty seconds from Chris Moore but there was heartbreak for local rider Jamie Williams who retired from the lead at Brandywell on the final lap.

Curinga (ILR/Mark Coverdale Paton) led the way through Glen Helen on the opening lap but only just with his advantage over Williams (Steadplan Racing Kawasaki) a minuscule 0.005 seconds whilst Victor Lopez (Xecretia Road Racing Team Aprilia) was only half a second adrift in third. Moore, Andrea Majola and Ben Rea completed the early leaderboard with the top covered by 8.6s.

Williams had taken over at the front as they leapt Ballaugh Bridge for the first time, but it was closing up even more with now 0.497s covering the front three riders. Moore (Dafabet Racing Kawasaki) remained in fourth, but Colvin (CBG Contractors Kawasaki) was now up into fifth with Majola (Biraus Paton) dropping back to sixth.

Curinga and Lopez had near identical times on the run to Ramsey, but it was Williams who was quickest and he was suddenly 2.8 seconds clear. However, his advantage was more than halved on the climb up to the Bungalow by Lopez with the gap down to 1.3 seconds, the Spaniard relegating Curinga to third.

Lopez’s race soon came to an end though as he retired at Crosby early on the second lap and by Glen Helen, Williams’ lead had increased to 6.273 seconds the demise of Lopez promoting Moore up to third with Colvin, Ingham and Rea (Heattech Racing Kawasaki) completing the top six.

By Ballaugh, Williams had almost doubled his lead and he pressed on for the remainder of the lap, a speed of 115.173mph giving him a more than healthy 14.468 seconds advantage but it was Moore now in second, the High Peak rider having lapped quicker again at 114.673mph.

That pushed Curinga down to third albeit by only 0.844 seconds whilst Colvin (114.533mph) had taken four seconds out of the Italian on lap two. Ingham and Rea remained in fifth and sixth. Meanwhile, newcomers Albert Walker and Michael Morris were impressing in tenth and 11th respectively.

Through Glen Helen on the third lap, Williams’ lead was down slightly to 13.3 seconds with Curinga back up to second and six tenths up on 1996 Newcomers race winner Moore. Colvin was still in fourth but Rea and Majola had moved up to fifth and sixth with Ingham dropping back to seventh.

As they started the final lap, Williams still led but his lead was down to 10.3s as Curinga made a late charge, the Paton rider now almost seconds up on Moore. Colvin, Rea, Majola and Ingham remained in fourth to seventh

The gap had been cut further at Glen Helen, now down to 7.2 seconds but Williams responded and by Ballaugh it was back up to 9.2 seconds; however, by the time they reached the Bungalow, his lead was back down to 6.4 seconds and news soon came through that Williams was slow through Brandywell.

That became a retirement at the 32nd Milestone and with a final lap of 116.475mph, a new lap record, Curinga swept to victory by 19.788s from Moore with Colvin and Majola coming through for third and fourth, all three lapping at more than 115mph on their final laps.

Rea and Ingham finished fifth and sixth respectively after Williams’ demise and it was Walker who claimed the leading newcomers honours in seventh from Morris with Andrew Fisher and Mark Herbertson completing the top ten.