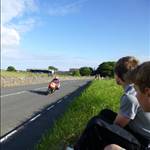 Reigning Southern 100 Solo Champion Michael Dunlop has shown his rivals he is determined to defend his title.

During the opening practice session on Monday, he topped the Superbike timings with a speed of 109.573mph.

Newcomer Tim Reeves with experienced passenger Dan Sayle was fastest in the Sidecars at 94.605mph ahead of Greg Lambert and Dicky Gale (94.466), Wayne Lockey/Kenny Cole (92.637) and Conrad Harrison/Dipash Chauhun (92.445).

One sidecar session was red flagged due to a two-outfit collision at Ballabeg. A passenger was taken to Nobles Hospital for observation - there are no further details.