More success for Payne and Wilkes at World Sidecar Championships 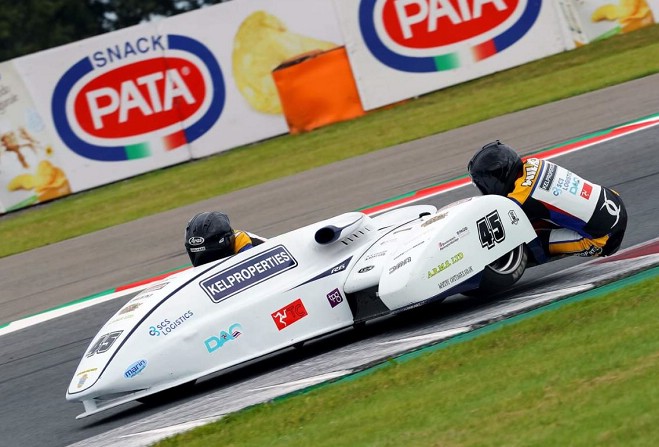 It was another solid weekend for Ballasalla-based sidecar driver Harry Payne and his passenger Mark Wilkes.

The Manx man competed in the Netherlands over the weekend after being given his second wild spot in the comp.

Payne only recently made his debut in the sidecar Champs at Donington Park, where he became the first Manx driver to compete in the tournament in 14 years.

It came after he was talent spotted at the British F2 Champs.

After qualifying 9th on his first time driving at this circuit, and only second time riding this bike, Harry, along with passenger Mark, got a lightning start on their KelProperties backed LCR sidecar. They were up to 8th position by the first corner, tagging onto the back of fast Frenchmen, Ted Peugeot/Vincent Peugeot. They inherited 6th after Tim Reeves/Kevin Rousseau had a coming together with Todd Ellis/Emmanuelle Clement. After the race it was found that Bennie Streuer/Jeroen Remme were 6kg under the minimum weight which promoted Harry & Mark to 5th place.

Race 2 on Sunday was a slightly hotter one. Another good start saw the boys slot into 7th behind Rob Biggs/Jeroen Schmitz, they were running a really strong pace until lap 8 they encountered a gear box problem where the bike jumped out of gear entering the hairpin which dropped them back to 8th. Harry decided to not use first gear for the remaining laps which cost a good few tenths per lap but they inherited 7th place when Reeves/Rousseau retired, which they then held there position to the line.

The team will be back on their F2 machine in 2 weeks at Cadwell Park for the 4th round of the ACU FSRA British F2 Sidecar Championship.