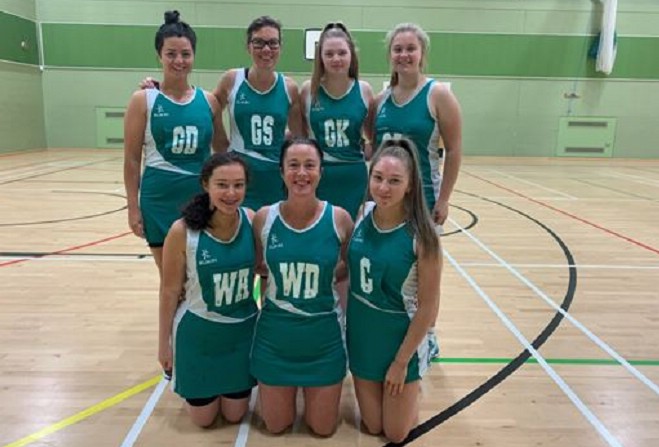 Simcocks Gold Eagles set off straight from the first whistle. Having the first centre pass, they used this to their advantage, with Callister (C) and Kinvig (WA) working together to feed the ball straight into Bowman (GS) who scored the first goal of the match. Simcocks’ solid defence let nothing pass them, and they gained a lead of 3-0. Determined to catch up, K.Cashin (GK) and Halsall (GD) worked relentlessly to get numerous interceptions. With the help of Vaughan’s (WD) speedy and nimble play, Gems turned over the ball enough times to equalise at 4-4. The first quarter finished 8-6 to Simcocks Gold.

In the second quarter, Dunn (WA) and Aumonier’s (GA) partnership meant that Simcocks carried on scoring. At the other end of the court, Hatten (GD) and Power (GK) battled against Cooke (GA) and Batty (GS), whilst Hennessey (WA) and Leith (C) worked tirelessly to keep the ball in Gems’ possession. Faragher (WD) carried on contesting every pass. The score was 12-11 to Simcocks at half time.

Gems started off the third quarter determined. A.Cashin (WD) never gave up, supporting the passes up the court, whilst intercepting in the defensive end. Salinardi’s (GS) precise shooting ended the third quarter at 23-17 to Simcocks. The final quarter showed off both teams’ work ethic, with intense play up until the last whistle. The final score was 33-25 to Simcocks Gold Eagles.

Long and Humphrey started well with GS Dani Kelly scoring a great long bomb off the first centre pass. Thompson were not to be deterred and moved the ball seamlessly through attack scoring the next goal. Thompson's defence GK Rochelle Boyd, GD Tegan Horrox and WD Natalie Christian won some early ball, enabling Thompson to take the lead 13-3 after the first quarter.

Despite some good work in and around the circle from Long and Humphrey's GS Dani, GA Emma Qualtrough and C Helen Gibson, Thompson continued to apply the pressure winning further ball. Thompson took advantage of their turnovers, kept possession and with some fantastic shooting from GS Georgie Harding managed to further their lead to 27-8.

The third quarter continued in much the same vein and Thompson continued to put their foot down. Long and Humphrey's defence GK Jess Edmonds and GD Beth Hall worked hard but Thompson's GA Ella Crowe, WA Emily Gaylor and C Madeleine Butterworth could not be stopped with GS Georgie rarely missing a shot.

Going into the 4th quarter Thompson had an unstoppable lead at 40-12 but Long and Humphrey came out strong and the introduction of GK Kerry Walker certainly made life harder for the Thompson's attack. Despite Long and Humphrey having their best quarter yet, Thompson could not be stopped winning the game 50-18. Player of the match deservedly went to Thompson's GS Georgie Harding.

This match saw two teams who haven’t played each other in the past so was always going to be an interesting game. In the first quarter both teams played well with Volts Sarah Morgan (GS) and Ella Page (GA) shooting on target against the defensive team of Daisy Downs (GK) and Shrav Sjvakumar (GD). At the other end of the court Ballas' Charlie Callow-Moore (GS) and Mairi Harrison (GA) shot equally as well against Emily Christian (GK) and Olivia Quayle (GD) leaving the first quarter 6-4 in Ballas’ favour.

The second quarter saw some good defensive work from Volts with Maisie Jamieson (WD) and Caroline Marshall (C) working well together to get the ball back up the court to Donna Jamieson (WA) feeding into Volts’ circle where they scored the largest quarter score. Balla worked just as hard from the centre passes with Kitty Thomas (C) and Lauren Raatgever (WA) getting the ball into their circle where the Balla girls continued to convert their shots on goal leaving the 2nd quarter 12-10 in their favour.

In the third quarter Volts moved some of their players around to see if they could intercept some of the strong centre plays from Balla. Balla took advantage of the changes that were made. This coupled with moving Georgia Walton into GD to team up with Amelia Brockbanks in WD and some brilliant shooting from all over their circle saw Balla pull well ahead of Volts to give them a 22-11 advantage going into the final quarter.

The final quarter saw some more changes from Volts with Emily making her debut as centre and Caroline moving into GK position. Balla having played so well in the previous quarter kept all players in the same positions. The energy levels from the young Balla team continued to grow and saw them pull even further ahead of Volts with the game finishing 30-14 to Balla.

Special mention to Volts’ Olivia Quayle who played her first senior match having up until today been playing in the U14s league. Definitely a player to watch out for in the future of netball!