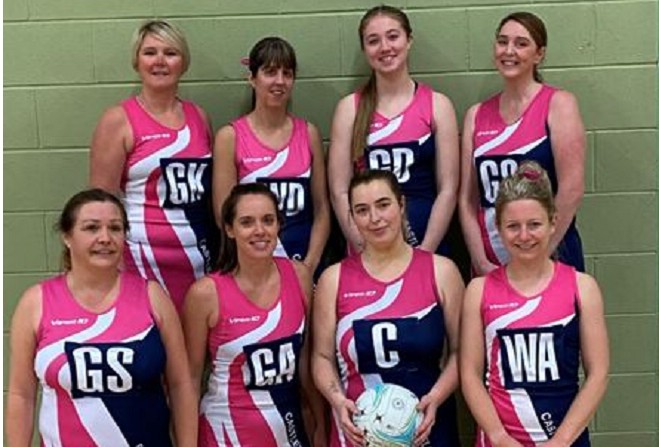 It was clear from the first whistle that both teams were fired up for this game and looking for the win.  Simcocks’ centre and captain, Sophie Howland started the game with high intensity, working hard to move the ball down court and into the shooting circle.  The Simcocks’ shooting pairing of Poppy Irving and Poppy Bowman found their form early on and were sinking some fantastic long-range shots.  The game went goal for goal for much of the quarter, but Sunterra Ballasalla’s Rachel Quayle made some crucial turnovers which resulted in her side finishing 3 goals ahead at the first break.

The fast and frantic play in the second quarter led to some sloppy play from both sides with several contact and obstruction calls from the umpires.  Sunterra Ballasalla’s defensive duo of Zoe Kirkham and Ella Carridge increased the pressure on the Simcocks’ shooters and came out with some impressive turnovers which Kate Williams and Rachel Hopkinson were able to convert allowing Ballasalla’s lead to be extended to 6 goals at the half time break.

The play was subdued as they started the second half and once again the teams looked evenly matched.  The Wing attacks for both sides, Helen Mason for Simcocks and Emily Ashe for Ballsalla, made some lovely feeds into the circle resulting in some lovely netball to watch.  Jane Ryder-Clague worked hard to link attack and defence and by three quarter time Ballasalla led by 9 goals.

The game was far from over and Simcocks increased the pressure for the final quarter.  The defence of Lizzie Power, Kenzie Pizzey and Claire Mason worked tirelessly to delay Ballasalla’s play to the circle edge, and this resulted in the best quarter of the game for Simcocks, losing that quarter by just 1 goal.  The final result ended 38-28 to Sunterra Ballasalla with Ella Carridge (GD) being named as player of the match.

Atla Group Pumas got off to a strong start taking an early lead. After an early injury to their GK, a substitution saw Sarah Jones and Breeshey Harkin in defence against the formidable Missfits GA Christie Sayle, who had a strong match and would have contested for player of the match, if not for the goal difference rule.
Missfits regrouped and came out fighting at the start of the second quarter. The pressure led to some over ambitious passing by Pumas and some impressive interceptions by Misfits GD Sophie Reynolds and GK Amy Pointon. Nevertheless, Pumas closed out the second quarter 11 points ahead.

In the third quarter, Missfits were keen to claim a point and pulled the score back to 26-14 with some fast play in the centre third by Rebekah Pate and Michelle Cannell.
However Q4 saw Pumas storm back with some great defensive interceptions by Stacey Batty, and some strong passes up the court via Elle Looney and Rachel Edwards into the shooting team of Hazel Bailey and Alex Cashin to score.

Hazel Bailey shone in the second half of the match, earning her Player of the Match through her continuous work making space and rarely missing a shot despite the best efforts of the Missfits defence, leading to a 38-18 victory for Pumas and denying Missfits that all important point.

Today’s match between Castletown Celts and Ramsey Blacks was always going to be a close match, as last season, both teams took a win against the other and so they both went into the game, with a confidence that they could take the win.

The game started with both teams evenly matched. Ramsey Blacks defensive circle were making it hard for the Celts shooters as both Ava Brown (GD) and Emily Craig (GK) were putting the pressure on and Ramsey ended the quarter a goal ahead by 6 goals to 5. Celts made a change in attack and the long-range shooting of Nicky Corrin (GS) working along with Louise Skelly saw Celts take the lead at the end of the first half.

The second half saw changes in both teams as Ramsey’s Captain, Nicole Pressley came on and rallied their mid court, which brought the ball into their shooting circle and saw this to be their highest goal scoring quarter. However, the change made by Celts saw the Southern team match them and extend their lead as their attack of Rebecca O’Neill, Hayley Duffus and Sarah Cutts came together to finish the third quarter 21-15.

The final quarter saw Celts dominate as their defensive line up of Amy Dunne, Holly Charmer and Holly Renshaw were on fire with their numerous interceptions and turnover ball, which meant their shooting circle had numerous attempts to capitalise and increase their lead. This resulted in the game finishing 31-18 to Castletown Celts and POTM going to their Centre, Rebecca O’Neill, who as always puts on a fabulous performance for her team.

Suntera Global Ballasalla Gales set off fast and furious against Castletown Vikings. The team moved the ball quickly through the court and found the ever-composed Nessa Farren easily under the post.  Ballasalla lead by three goals at quarter time.

No positional changes were made by either team going into the second quarter, but the Castletown defenders Isabelle Cutts and Michelle Blyth were man-marking their opponents with more effect. With Ballasalla unwilling to slow the pace and their options being limited, the ball ended up in the hands of Castletown more often and the lead changed.

At half time, Castletown were ahead 13-10 and they brought on two new circle defenders for the third quarter, Phoebe Roosen and Olivia Cregeen. However, it was the efforts of the Ballasalla circle defence that turned the tide of the game yet again. Castletown shooter Nicky Corrin had been stepping out to take the ball nicely throughout the game, but Ballasalla goalkeeper Charlotte Brooks was able to apply just enough pressure to effect the feed in, and some crucial interceptions from goal defence Trinity Hebden ensured the Ballasalla side won the quarter and only trailed by one goal at three quarter time.

The last quarter was going to be exciting and became a competition of the centre court. Strong runs into the end third by Castletown wing attack Vicki Corrin kept the ball flowing to her shooters, but this was matched by the determination of Ballasalla Centre Annelise Mellor who was receiving almost every other pass to drive the ball down to her shooters. No team could make headway into the score and the game ended 22 all. Player of the Match was awarded to Castletown’s Vicki Corrin.