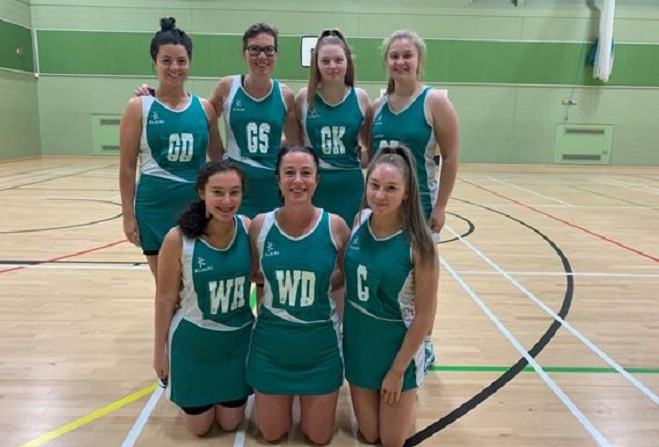 Topping the table eight points clear of second place Route 1 Connections, it's the third consecutive year the team has cruised to victory in the Premier League.

It's a cracking comeback season for runners-up Route 1 though, who were at the point of relegation last season.

In Division One, Castletown Spaniards topped the league table four points ahead of newly re-jigged side Ballasalla Charlie.

And standing head and shoulders above the rest in Division Two are Manx Gems Emeralds.

The season finale will be played out this weekend in the Judi Clark-Wilson Charity Cup.

You can see the full 2021 league results here.

The first quarter saw both teams come out fighting with some efficient passing up the court and some strong centre passes. Simcocks Blues attacking side saw Helen Mason (WA), Bayleigh Mitchell (GA) and Poppy Irving (GS) work well together, leaving Simcocks Gold behind by 2 goals.

Golds defensive duo of Lizzie Power (GK) and Jess Hatton (GD) were raring to go in the second quarter and put Blues under pressure in the shooting circle with some well-timed intercepts and rebounds.

Golds trailed behind by 2 goals again heading into the third quarter, however, they were keen to level the playing field. Golds Sam Dunn (WA), Heather Parsons (GA) and Poppy Bowman (GS) worked hard to close the gap. Golds went into the final quarter 7 behind.

Blues maintained the pressure in the final quarter with Claire Mason (WD), Sophie Howland (C) and Helen Mason working the ball well down the court. Blues took a comfortable win of 28-18 and Player of the match went to Helen Mason for Simcocks Blue.

This was the final match of the season and what a match it was, as it started with both teams pushing and striving to get the goals. However, it was the strong attacking force of Simcocks that took the reins with the dynamic duo of Poppy Irving (GA) and Ellie Barker (GS) who were dominating in the shooting area, with the end of quarter score, being 13-5.

Simcocks continued to control the court especially Alice Ledbeater-Terris (C), who commanded the midcourt well with support from Beth Mosely (WD) and Lucy Sutterby (WA) who was making precise passes into the shooting circle. Route 1 were still battling strong, and it was a bitter blow when promising GA for Route 1 Emily Christian had to leave the court due to injury. The half time score being 23-11

This didn’t deter Route 1 going into the second half of the game Sarah Morgan (GS) rallying her team to push and fight hard for the ball with Kate Doran (C) Kim Beevers (WA)  and Lucy Tyndale-Biscoe (GA) pressing to break through the Simcocks defence of Claire Parker (GK) and Chloe Wood (GD). Route 1 found a second wind and succeeded with some crucial turnovers albeit a little too late in the game. Poppy Irving (GA, for  Simcocks) shone strong throughout the game and thoroughly deserved player of the match. It was a great game to play, spectate and finish the 2020-21 season on.