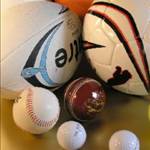 There is a further attempt to play three first round postponed Paddy Power F.A. Cup ties this afternoon.

The big clash is at Blackberry Lane where in-form Old Boys meet Peel.

Holders St. George's now have home advantage with the game against Foxdale switched from Billygoat Park to Glencrutchery Road and Ramsey host Colby at Ballacloan Stadium.

Only two quarter-final clashes go ahead on the scheduled day which gives an indication of the fixture backlog.

There's a south Douglas derby when St. Mary's host Pulrose and Douglas & District travel to Laxey hoping to cause a major upset.

The Manx Trophy fixture between Douglas "B" and Southern Nomads has been postponed due to a waterlogged pitch.

In the Wi-Manx Men's Hockey Premier League, Champions and leaders Bacchas "A" play Bacchas "B" while nearest challengers Valkyrs "A" also play their own "B" team.

Ladies Premier Champions Vikings "A" defend their 100% record away to Ramsey "A".