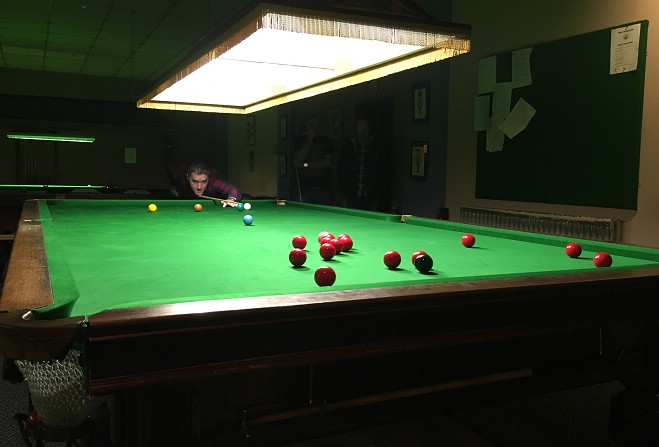 They need to win just two of their remaining ten frames to be mathematically unreachable at the top of the table - and that's only if second-placed Finch Hill 'Musicians' win their remaining two fixtures 5-0.

The top two sides clashed last night at Finch Hill, with the 'Musicians' edging the tie 3-2 - Peter Glover, Calum Gardner and Matthew Dodd getting the wins for the home side.

Mike Doherty and John Kennish, who had a break of 36, won important points for the league leaders - a break of 28 wasn't enough for Peter Collister to reduce the handicap deficit against Dodd.

Finch Hill 'Mob' move third with a resounding 5-0 win over Douglas Snooker Club 'Bandits' - Tom Miller starred with breaks of 30 and 27, plus there were breaks of 23 and 21 for Peter Kirkham and Peter Crellin.

Those three all won, and there were also victories for Martyn Lean and Steve Oates to complete the whitewash.

Finch Hill 'Rockets' were the other major climbers, winning 4-1 away at Douglas Snooker Club 'Hurricanes' on a newly re-clothed table.

Dollin Mercer, 'Rocket' Ron Grogan and the in-form John Spellman put the 'Rockets' into an unassailable 3-0 lead, before Chris Murphy pulled one back against Paddy Delaney, but Graham Ashton sealed a good win for the guests with a break of 20 - Paul Smith also had a break of 22 but couldn't catch 'Rocket' Ron.

On the other table at Douglas Snooker Club, Port St Mary Legion came from 2-0 down to win 3-2 away against the 'Wannabes' - Steve Cowin and Fred Corris started off well for the hosts but Shaun Roberts and Marc Morley, with a break of 22, took the match to a decider which was then won by Terry Boyle.

Malew 1 won the Ballasalla derby against Malew 2 - Dennis Quaye, Roy Gelling and Nick Crouchman winning for the bottom-of-the-table side with replies from Paul Bridson and Mark Quinn.

Finally, St Olaves 'New Skool' continue to drop down the table after an impressive start to the season - they lost 3-2 at home to Peel Legion.

Without talisman Sean Corkish who is competing at the World Team Cup in Qatar, Mark Thomas and James Kerr were the only winners for the hosts, although a break of 35 helped Kerr to an almost-100-point win over Don Humphries.

There was also a break of 25 for Dan Crawley, but it wasn't enough to beat Geoff Hall in the deciding frame after John Kelly and Mike Crook had also won for the westerners.