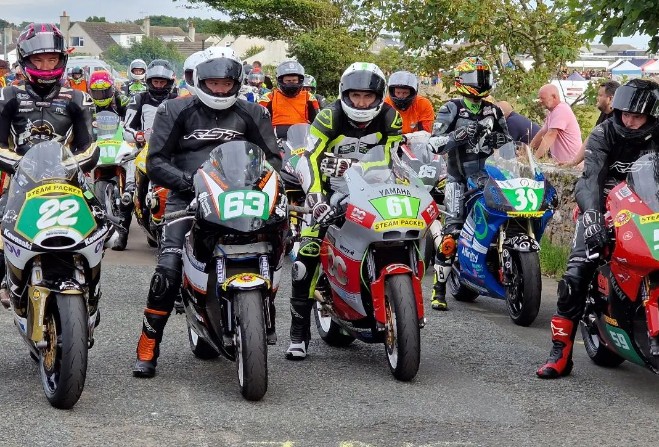 A packed schedule of five races is penned in for day three of the Southern 100 Road Races tonight (13 July).

First up will be the 250cc/750cc Lightweight Race which was originally due to take place last night (12 July) but is now due to be held this evening from 6.20pm over six laps.

Jamie Coward is on pole for the contest with Rob Hodson in second and Paul Jordan making up the front row.

In behind them in fourth, fifth and sixth are Jonathan Perry, Barry Furber and Rhys Hardisty respectively.

Then it's the turn of the big bikes once more for the seven-lap Ellan Vannin Fuels Senior Race from 7pm.

Dean Harrison on board his DAO Racing Kawasaki will start on top spot, hoping for better fortunes after retiring from last night's Peel Holdings Senior Race.

Joining him on the front row will be Michael Dunlop in second and Jamie Coward in third.

Leading the second row is Nathan Harrison who finished third in last night's contest whilst Davey Todd, senior race winner on Tuesday, is in fifth with Ryan Kneen in sixth.

The next two races will then see the Supersport 600cc machines in action with either white or yellow plates.

The seven-lap J.C.K Supersport Race 4b is first at 7.40pm with Don Gilbert on pole with Jack Petrie and Michael Russell starting second and third respectively.

Then at 8.15pm the Radcliffe Butchers 600cc race 4a is penned in, also over seven laps.

Dean Harrison, Michael Dunlop and Jamie Coward once again occupy the front row with Davey Todd, Rob Hodson and Paul Jordan in the mix just behind.

Rounding off the night's action will be the first sidecar race of the Southern 100 this year over six laps, starting at 8.50pm.

On pole will be defending 2019 champions Pete Founds and Jevan Walmsley, who managed to break the 100mph mark during Tuesday's practice session.

Tim Reeves and Kevin Rousseau will sit second on Castletown Bypass with John Holden and Dan Sayle in third.

All timings for tonight remain approximate and are also subject to any prevailing weather conditions.

Roads are due to close around the Billown Course this evening from 6.05pm and will reopen no later than 9.40pm.

Manx Radio will be bringing live coverage of tonight's racing on AM1368 from 6pm.