Pitt crashes out in Italy 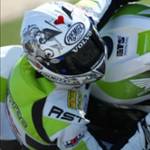 Defending champion and Peel resident Andrew Pitt had a race to forget as he crashed out of round eight of the World Supersport Championship in Misano, Italy, yesterday.

The Hannspree Ten Kate rider started from ninth on the grid but powered into second place on the first corner and led two turns later.

However, while pushing hard to extend his advantage on the second lap he lost the front end on turn 10.

His team mate, Kenan Sofuoglu, fared little better, crashing coming out of turn one on lap three and failing to make it back to the pit lane in time for the restart, after his spill left oil on the track and caused the race to be red flagged.

Neither rider was injured but all in all it proved to be a disappointing weekend for the Hanspree Ten Kate outfit.

Their championship ambitions were dealt another blow with current leader Cal Crutchlow winning the race and extending his lead over Eugene Laverty to 14 points.

Sofuoglu lies in third, 38 points back on Laverty while Pitt is languishing in sixth.