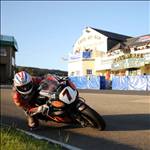 A broken chain for John McGuinness in today's Senior TT gave first place to his team-mate.

HM Plant Honda rider Steve Plater set a new race record to take the win which, when combined with a second place and three fourth positions earlier in the week, gave him the overall TT championship.

A broken chain on lap four finished McGuinness's race, although he did manage new absolute lap records on each of his first two circuits of the mountain course, the new mark being set at 131.57mph.

Another highlight of the race was the second podium finish in three days for Manxman Conor Cummins.

He was runner up to Plater, one place higher than he managed in Wednesday's Supersport 2 race.

After the race Chris Kinley told him exactly how fast he went: