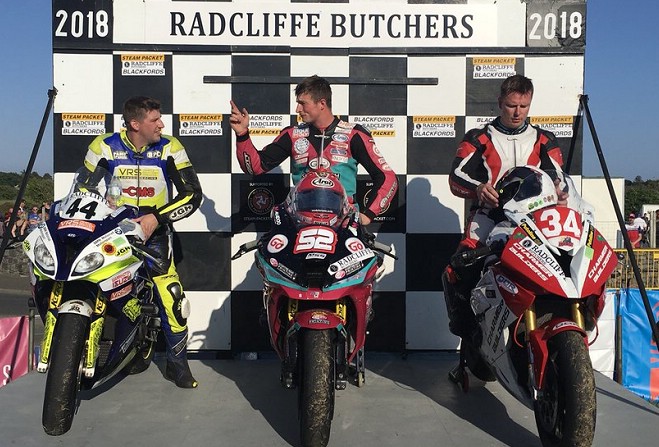 The sun was shining on James Cowton as the Radcliffe Butchers Post TT Road Races took place at the Colas Billown Circuit in Castletown this evening (9 June).

The Yorkshireman set the pace in practice, before securing three podium finishes, setting two new lap records along the way.

The meeting also saw a return to road racing for Ryan Kneen, after an emotional fortnight for the Kneen family.

Adam McLean took an early lead in the CuPlas Callow 600cc Race, with less than a second separating the top three at the end of the first lap.

And it stayed a closely fought battle throughout the race, with McLean just holding on to the top spot ahead of second placed James Cowton and Joey Thompson in third.

The final lap produced a nail biting climax when Cowton edged ahead at the start of the eighth circuit, setting a lap record of 109.311 mph along the way.

But McLean managed to fight back, taking the chequered flag 0.2 seconds ahead of Cowton, with Joey Thompson securing a comfortable third place.

There was little to separate the top three as the machines made their first lap of the circuit in the 250/650cc Race, but it was Joey Thompson who managed to take the lead ahead of James Cowton.

The Selby man held on to the top spot throughout the race, breaking the lap record on the third lap, completing the circuit at an average of 102.208 mph.

Cowton closed the gap just after the mid-way point, shattering the lap record again with a lap of 102.758 mph.

But Thompson managed to pull away during the last lap, finishing nine seconds ahead of his fellow Yorkshireman Cowton.

The battle for the third place on the podium was won by Jonathan Perry, who came in less than a second ahead of forth placed Rob Hodson.

When the big bikes took to the circuit for the final race of the day, the Manx Independent Carriers 1100cc Race, James Cowton was a clear contender from the start.

He took the lead on lap one, holding off a challenge from Rob Hodson, who kept the pressure on throughout the eight lap race.

At the end of the final lap, Cowton took the chequered flag just 0.6 seconds ahead of his nearest rival Hodson, setting a new lap record of 112.345 mph in the process.

And there was an emotional finish for Ryan Kneen, who secured the third place on the podium.

Tim Glover describes Kneen's celebration as he crossed the line: