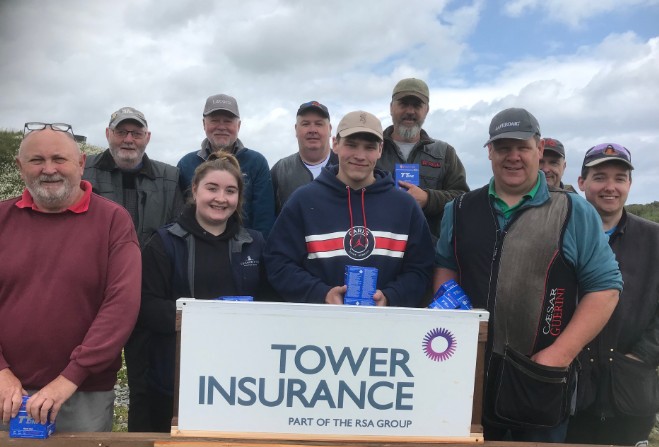 The fourth round of the Tower Insurance DTL league was held at Meary Veg Santon with 17 competitors taking part in dry sunny but windy conditions.

The leader after the first round was newcomer and B class shooter Calum Craine hitting 24 targets for 72 points, in second place on 70 was Mike Walker with Mark Riley and John Moore in equal third place on 69. The leading C class shooter was Rob Marshall with 68 points.

In the second round round scoring was not any easier with the wind now gusting making the targets duck and dive .

George Davies finished in third place in B class with 134 points ,second in B went to Rob Corlett with 136 points but the winner of B Class and equal highgun was Calum Craine on 140 points.

We had a three way tie for third place in A class between Brian Faragher, Peter Kelly and last weeks IOM DTL Champion Alan Wade all with 137 points, in second place on 139 was Mike Walker but taking A class with 140 and equalling Calum Craine’s score was Dad Steven who hit the only 25 straight of the day for 140 points, so morally took highgun on count back.

In the afternoon the forth round of the Sadler Agricultural Supplies ABT league was held again in windy conditions. Mark Riley lead the way after the first round only dropping one target for a 24 ,in second place on 22 were Alan Wade and Mike Walker with Steven and Calum Craine next on 21.

The fourth round of the Manx Petroleum's Olympic skeet league was also held and super vet Dave Clague was the winner with 42 points with James Bradley second on  39 and Stan Cross third on 35.

Next week is the forth round of the Colin Bowen Memorial English skeet league.