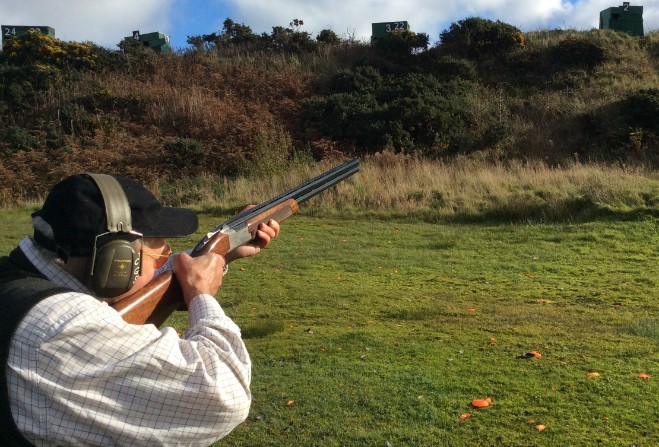 One thousand pounds was up for grabs this weekend in the Meary Veg Sporting GP.

The competition was held over 16 stands with each of the six squads doing four laps of four stands on each lap.

There was a six-way tie for first place after the lap one with Michael Cross, George Davies, Dave Lally, Jack Clague, Mark Riley and Mark Barnett all returning scores of 26 out of a possible 32.

George Davies was in the lead on his own after lap two with 49 points, in second place on 48 was Michael Cross with Dave Lally in third place on 45. He was followed by Paul Mihailovits in forth on 44 and John Moore, Andy Morgan and Jack Clague next on 42.

There was a new leader after lap three in Michael Cross with 69 points with Dave Lally now in second place on 67 with George Davies and Paul Mihailovits in equal third place on 66. John Moore was in fifth place on 64 and making the top six was Andy Morgan on 61.

After the fourth and final lap junior Zac Bell finished in third place in C class with 64 points, second was Richard Kneen on 68 and taking the win in C class with 69 points was junior Joe Faragher who also won the junior high gun cup.

A sudden death shoot off was called upon in B Class to find out who was in third place between Rob Corlett and Peter Kelly. Both shot 77 with Peter winning by 4 to Robs 3, second place went to Andy Morgan on 79 but winning B class with 81 points was John Moore.

It was similiar story for third place in A class with Jack Clague and Mark Riley tying on 78 points. Mark won the shoot off 2-1, Dave Lally was second in A on 84 and George Davies was crowned champion of A Class with 86 points. The runner up overall was Paul Mihailovits with 87 points but winning the Meary Veg GP with 91 points was Michael Cross.

In the team highgun section of the competition the winners were father and son Stan and Michael Cross with 167 points, in second on 162 were George Davies and Juan Cowley with Peter Kelly and Jack Clague taking third place on 155.

A handicap team event was also held and the winners were Paul Mihailovits and Zac Bellhouse with 240 points. In second place were Dave and Andy Morgan on 229 and Brian Kelly and Mark Sweetman took third on 226.

This Saturday is an MCTSA ABT selection shoot at 1:30pm and on Sunday the IOM ABT championship.