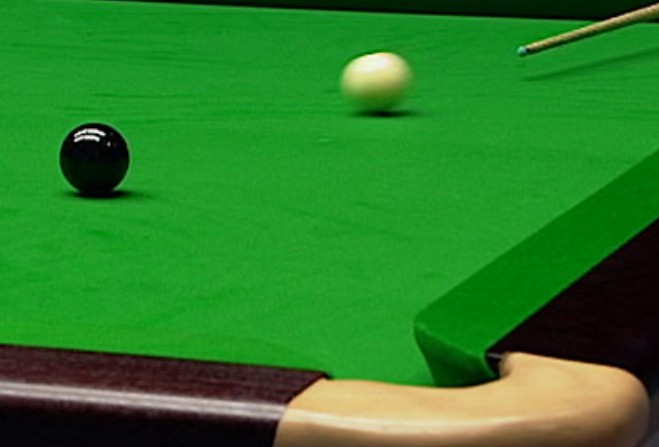 Cue Zone Masters retained their position at the top of the Mac’s Builders Merchants snooker league with a final black victory at Peel.

Mike Crook 63-48 Paul Russell, cracked ribs strangely seemed to help Crook’s game, he raced into a handy lead before Russell came back well to retake it. With one red left Russell was extremely unlucky to cannon the black in. Crook doubled the red to the corner and cleared to the brown but missed frame ball blue. Fortunately another chance soon came, a thin snick to the middle which dropped, but there was a nervous wait as the white very nearly went into the opposite middle bag. Don Humphries 43-89 Brendan Clague, Clague’s 35 start was never threatened with Humphries missing multiple colours. With two snookers required on the yellow, Humphries actually got them but promptly gave 12 points back in fouls as Clague worked his way to yet another win, and a handicap cut. Barton Beaumont 44-54 David Kelly, plenty of balls potted by Beaumont but calamity on the final yellow resulted in many balls clattering and the black dropping. Kelly tucked away a good long range pink for the frame. John Kelly 77-55 Jez Hill, a very mature performance from Kelly. A few years ago he was playing off 49 but is now down to 21 and chased down the 42 start with ease, including a 27 break having to use the smaller colours. That said, it did take a fluky brown, doubled the length of the table to leave snookers required. Geoff Hall 41-51 Martin Rigg, there was never more than a handful of points in this decider. Rigg needed the last three balls to snatch it which he did having played a nice positional shot when taking the pink into the green bag, stunning down for the black placed near its spot to perfection. CZ Masters stay top and Peel lose their fifth on the run, all by an odd frame.

Richard Hillier 59-27 Marc Morley, with four balls left Marc needed a snooker. Richard was always in control and looked more than useful off his handicap where he has already won as many games this season as he did in the last. Alex Sinclair 19-63 Dave Pickersgill, with a 21 start, plus pink and black going safe Dave worked well on the blue to run out an easy winner. Kam Virk 39-55 Phil Joynes, best frame of the night, both players going blow for blow down to the colours. Kam unluckily went in-off the blue which Phil potted and a few safety shots from both players before Phil got the pink for a good win. Lee Gale 78-24 Terry Boyle, playing well, Lee controlled the frame and cleared the last 5 colours for a 25 break. Terry, earlier had several good chances but having missed the pack from the break described his performance as, ‘woeful’ missing three easy blacks and no other colours. Dave Welsh 56-9 Matty Astill, this was played simultaneously as frame 4 on the adjacent table and poor Matty took a similar battering to complete the Jacksons comeback win.

Marek Kenny 61-14 Shaun Roberts, Roberts had already earn’t a handicap cut from next week and Kenny has too after this one-sided affair. Jonny Hogg vs Johnny Myers, Hogg was put in all sorts of trouble early on, 3 times missing the reds completely and 3 times potting the cue ball. But as the game grew, Hogg found his feet making small breaks. He still trailed by 21 on the yellow but took all the colours to win 63-57. Graham Ashton 45-58 Jamie Wilson, both struggled to find any rhythm before Wilson had a good 24 to take the lead. Ashton hit back with 16, but was then put in a tough snooker, the last red covered by the black on a side cushion, only possible to hit off of 2 cushions, giving an instant free ball after each failed attempt. Wilson profited 16 points and although Ashton hung in with brown and blue he missed and left the pink up for Wilson. Sean Murphy 83-32 Ste MacDonald, Murphy soon got on top, making good long pots and multiple small breaks to open a massive lead. Ste had no running and struggled badly, he carried on for snookers to no avail. John Spellman 51-42 Gary Conwell, Spellman was 25 up with 3 reds left before ‘The Grinder’ found some rhythm, playing good safety and snookers to close the gap considerably. He pulled it back with a 16 break and then yellow, green and tricky brown. Spellman potted the blue to nip back ahead. Safety play the length of the table followed until Spellman potted an 11 foot pink for the frame. After a sticky start that’s three wins on the spin for the reigning champions.

Dave Kelly 26-50 Rob Callister, a full 10 minutes before a ball was potted. It continued scrappy with Kelly holding sway before Callister got his eye in and a few bigger colours to take the lead and push on for the win. Paul Smyth 48-87 Andy Taubman, Smyth started well, catching up most of the 42 handicap before his opponent too made some pots. Taubman then maintained around a 30 lead to the colours, with Smyth needing 2 snookers he accidentally potted the pink out of sequence and offered his hand. Another good win for Taubman in his first league season. James Kerr 88-78 Frankie Pitts, Pitts had a few in-offs helping Kerr catch up most of the handicap. Kerr, with a few teen breaks took the lead and held on for a tight win on the pink. Darrell Thacker 82-69 Paul Tangeman, Tangeman held the advantage until he tried to slide past the black to pot the penultimate red, clipped the black but still potted the red to leave Thacker needing a snooker. Then, in a weird few shots, Tangeman either missed the snookers laid or went in-off, 5 shots in a row! These 23 points brought Thacker right back into it and ultimately he won the strangest of frames on the black. Dan Crawley 77-68 Danny Russett, the battle of the Danny's, with Russett potting the better to add to his 35 start and Crawley missing shots he would normally pot. Crawley needed 4 snookers, which he got slowly over time, then getting the early colours singly. Crawley then potted a worldie long pink off the cushion landing perfect on the black for a tap in to nick a win St Olaves never looked like getting.

After a quiet start to the season Calum Gardner chose the last match before his handicap went up to show his class with breaks of 41 and 26 defeating Tony Pring 81-44. Conor Mahon 60-49 Alec Oates, 4 wins from 5 for Mahon. Darryl Hill 86-81 Tony Cubbon, a 70 start for the previously undefeated Cubbon wasn’t enough. The win went to Hill, with good matchplay snooker and achieving a lowest recorded handicap of -42 in the process! Stephen Proctor 46-51 James Goodwin, a black ball win for the Malew’s sole point. In the final frame Scott Campion found Mark Quinn a slightly easier proposition than three time world champion Mark Williams, (who he took to a re-spot black in a recent exhibition) winning 78-23.

The IoMBSA snooker ranking event 1 recently took place at The Cue Zone, and was the first of 5 chances to gain points towards qualification for this season’s Grand Prix, Premier League and Home internationals selection.

With initially 14 entries, Ken Kinrade tournament director stepped in to make up 15 and have 3 groups of 5 with the top 2 from each group going through to the knockout, as well as the two best 3rd placed players ranked on frame difference.

Lee Gale was impressive in group stages and ended up as the number 2 seed for the knockouts following a string of breaks. Kinrade really rolled back the years at times, defeating Marc Morley and John Spellman. He was unlucky to be in the same group as Jamie Wilson and No.1 seed Darryl Hill and with two 3-0 losses he ended up as the third placed player that didn't qualify, losing out by two frames.

Jamie Wilson really should have beaten Hill in a semi-final decider but missed a blue with the rest leaving it on for Hill, frame scores Hill first, 52-55, 60-9 and 62-31. Calum Gardner defeated Chris Dagnall in the other semi, scores 55-46 and 67-18.

The Hill vs Gardner final set up a repeat of last season’s first ranking event, once again it went to Hill, who with breaks of 40 and 38 took it 2-0, scores 66-9 and 74-34. Congratulations to Hill and also Gardner who both take a big step towards qualification for future events.

The highest break of the day was a slightly disappointing 49 from Hill but there were exactly 70 breaks over 20 which is quite impressive.

The next ranking event takes place on Sunday 27th November.