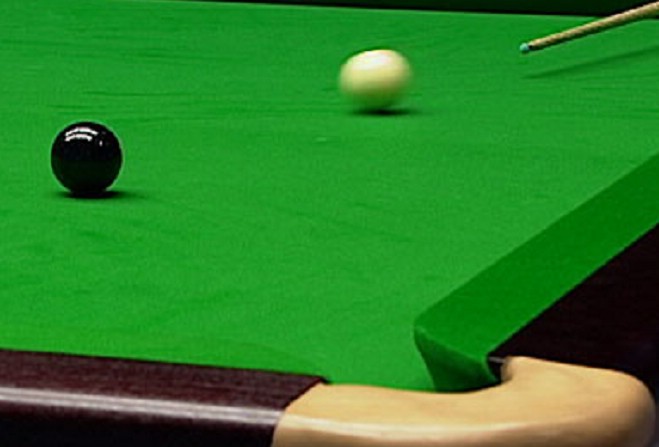 With co-leaders Musicians having a bye, Finch Hill Mob took advantage with big home win to go clear at the top after week 5 of the Mac’s Builders Merchants Snooker League.

Peter Kirkham 78-58 Stuart Littlewood, this turned on the final red. Kirkham put Littlewood in a snooker that yielded about 20 points and then potted all the colours. Tom Miller 49-53 Shaun Roberts, the latter was always ahead in scrappy frame, Miller 17 behind on the colours, potted yellow to pink and then missed a tough black which Roberts potted to win his first point since joining Hurricanes. Steve Finnegan 59-35 Jamie Wilson, Finn potted blue to black to win. Peter Crellin 78-34 Chris Dagnall, Crellin had Dags needing snookers after 15 minutes after this week’s highest break of 36 which could have been more. Crellin, ever the perfectionist even admitting he played well. Lee Hunt 72-58 Paul Smith was an epic, Smithy will never know how he didn't win it.

Revenge for the Rockets in this rematch of last season’s title play-off decider. Matt Radley 99-42 Paul Smyth, both were off their normal game but a couple of fluky snookers helped Radley extend his handicap advantage. Smyth continued to struggle and soon required snookers. Radley finally came good with a superb 25 clearance. Marek Kenny 49-45 George Taylor, after a cagey start, Kenny went 20 ahead with six reds left and looked good for the win but Taylor came back with a couple of snookers and teen break and took it to the black. Kenny potting it, a half ball cut with the rest with the black near the brown spot. Graham Ashton 85-34 Adam Blake, with the run certainly going Ashton’s way he strolled away with a few teen breaks. John Spellman 89-29 Dave Kelly, Spellman missed some initial chances, but soon got his game together as Kelly struggled badly and with a very nice 20 break towards the end won well. Marc Bolton 51-90 James Kerr, breaks of 26 and 24 from Kerr gave St Olaves a consolation point.

The long wait for a Wannabes win looked to be coming to an end after Stevie Cowin beat an injured Dollin Mercer 99-37 and David Callister took a one-sided frame 54-10 over Chris Killey putting them two up. However, it wasn’t to be after Harry Minor 35-69 Paul Tangeman and Dave Corris lost to debutant Danny Russett 34-54. Wannabes Fred Corris did get a shot on the final black in decider but it was Rhys Moore who took it, frame and match 56-62. Moore maintains his 100% record. Wannabes travel to play Jacksons next week who are yet to win this season, so perhaps a case of 14th time lucky?

Blinders good start to the season continues with four wins from five. Ivan McMaw 79-46 James Goodwin was a comfortable win for McMaw. Calum Gardner 63-57 Mark Quinn could have gone either way as could all the remaining frame but Gardner potted the black after they both had a few safety shots and attempted pots. Scott Campion 51-32 Tony Pring, Campion started best but Pring brought it back to re-take the lead. With the scores close on the green it was Campion who cleared green to pink for 3-0. Jez Hill 72-76 Alec Oates was a titanic battle but that didn't look likely as Oates quickly overturned the 28 start which included a break of 21 but as some mistakes crept in for Oates, Hill was able keep with him all the way to the black. Both players missed blacks they would have fancied but Oates eventually knocked in a very nice long pot to win what would be Malew's only point of the night. In the last Martin Rigg continued his excellent start to the season overturning a 35 point handicap deficit to beat David Quayle, finishing it with a very nice long pink, 73-57.

Newbys go joint second after a solid performance. Mikey Booth 75-21 Lee Gale, Booth kept up his impressive start to league snooker, one of just two players with 5 and 0 records. Ste MacDonald 22-57 Alex Sinclair, Sinclair winning with some good long pots and clever match play. Adam Dooley 58-21 Kam Virk, a rare whitewash as Dooley amassed 58 points unanswered as Virk’s score was his handicap start. Zain Abideen 75-49 Mike Reddington, Abideen scored an impressive 75 points in a frame that was a lot closer than the score shows. Simon Gardner 51-27 Tony Dhadwal, neither were near their best as Dhadwal left some easy chances for Gardner to build a lead in this scratch frame. Overall an unflattering result for Jacksons who deserved more out of the match and are great bunch of lads and a pleasure to play against.

A first win of the season for PSM in the battle of Legions. Don Humphries 38-70 Matt Astill, surprisingly with Humphries, being something of a billiards aficionado he managed five in-offs to help Astill, who played steadily throughout on the way to a first league win. Barton Beaumont 75-34 Phil Joynes, again Beaumont’s potting certainly wasn’t that of a 56 handicapper as Joynes threatened to get into gear without quite managing it. Mike Crook 53-70 Dave Pickersgill, both players were potting well and after a bit of bad run for Pickersgill, Crook had taken the lead with one red left after being well behind. In a tense finish, Crook, trying to lay a snooker on the blue, screwed in behind the pink but just underhit it and Pickersgill took the easy blue and a mid range pink for the win. John Kelly 67-58 Marc Morley, probably the frame of the night, which with just three balls left on the table saw them grouped neatly in a triangle, mid table, after a great safety from Morley. Whilst Kelly just escaped the snooker he was put in more trouble and conceded a foul on the blue which Morley took. Needing both pink and black, Kelly tucked away an easy pink and wrapped it up with a very nice long black. The respective stalwarts of each team fought out the decider, Geoff Hall and Terry Boyle. Boyle soon extended his 14 start to 40 nicely mopping up reds left by Hall, usually with a black. Hall fought back well including a couple of difficult plants and a snooker escape cleverly using the jaws of a corner pocket. He was just 17 in arrears and two reds left before Boyle went red, black, red, brown the first three of which were all great pots. Whilst Hall did get the snooker required he soon gave it back and the handshake followed shortly after, 39-70 to Boyle.