Snooker: Gap tightens again at top of the league 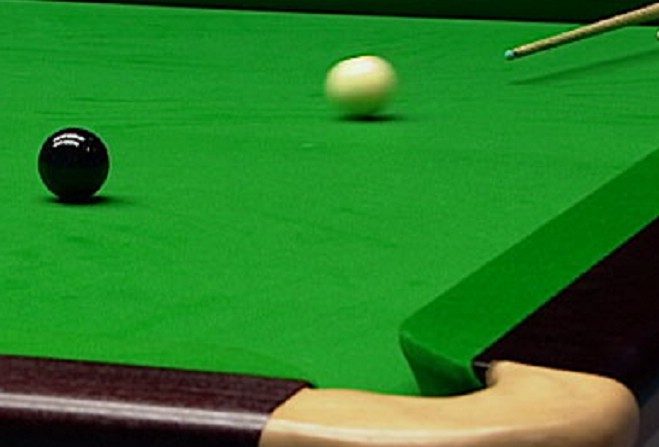 The handicaps have certainly worked out in this season’s Macs Builders Merchants snooker league. Another loss for Finch Hill Rockets, but they remain top on 60 points with five teams including all the other Finch Hill based teams, Mob, Musicians and Reprobates, plus St Olaves and Peel Legion on 59.

Matt Radley 43-68 Jamie Wilson, some good snookers laid by Wilson with the last 4 reds safe near cushions. Radley was unlucky to go in-off after a good escape, then good potting and low teen breaks by Wilson left Radley 14 behind on last three colours. A good blue and pink by Wilson sealed it. Marek Kenny 82-71 Paul Smith, Smith chasing 35 broke and left the white tucked up behind the green. After Kenny's failed escape Smith’s next safety put the white behind green again!  Smith, on a break missed a blue he'd usually get that probably would have seen him win, credit to Kenny who hung on potting the last colours to take the win. The match had the potential of the Murphy brothers, Chris and Sean playing each other but sadly the draw didn’t allow that to happen as they appeared separately in the next two frames. Graham Ashton 35-61 Chris Murphy was an hour long, Murphy potted superbly, and Ashton needed a couple of snookers on the last 3 colours. Murphy potted blue and pink, showed no rustiness in his first league match in over two years. Sean Murphy 61-42 Gary Conwell, potting well from the start Murphy extended his 28 start. He looked like running away with it, but an excellent 26 from Conwell put him back in contention, however a missed brown ended his hopes. Doug Kinrade 61-86 Chris Dagnall, Kinrade struggled to keep Dags out, several high teen breaks and good snookers followed by the 22 break condemned the leaders to another defeat.

The Musicians went 2-0 up after David Callister 27-64 Vinny Dale, Dale’s fine season continuing. Then Steve Cowin 53-78 Vic Rigby, where Rigby was on form and had his practice partner in all kinds of trouble with safety. An amazing last three ball clearance by Paul McKinstry pulled one back stealing the frame 52-48 against David McVeigh. Wannabes levelled with Fred Corris 75-28 Matthew Dodd, good safety from Corris as Dodd couldn't get going and gave away more points in fouls than he scored! James Teare 51-82 Dave Hanlon, Hanlon held his nerve and played well to take the decider.

Rob Callister 75-37 Matthew Astill, this was closer than the score would suggest with Callister getting a few snookers on the colours and Matty not quite on his game. Dollin Mercer 64-50 Dave Pickersgill, three reds left and Pickersgill was 22 ahead. Pickersgill took a red in the yellow pocket but went in-off and Mercer went up a gear, potting the last two reds and the colours up to the pink for a well worked 32 break and frame. Chris Brown 52-21 Phil Joynes, the latter off his game, with Brown steady for an easy win. Paul Tangeman 33-64 Terry Boyle, Tangeman has had a great season but on this occasion Boyle got all the run and although Tangeman tried hard nothing went his way. Rhys Moore 58-44 Marc Morley, from 28 back Morley needed pink and black for a re-spot. He got the pink but after a long battle on the black Moore finally potted it to the green pocket. A good result for Reprobates, perhaps PSM were hung over after a good result the night before against Wannabes in the Wakefield Cup?

Barton Beaumont 61-30 Brandon Forrester, no run for Forrester chasing 28 from the off. Twice he potted good colours followed by unlucky fouls. Beaumont was still 26 up on the yellow. Forrester took the yellow but landed horribly on the green. Beaumont knocked in a great long green followed by brown for the frame. Don Humphries 63-30 Josh Rigg, a first win in seven for the Peel man where Rigg never got going. A nicely controlled long yellow from Humphries with green left him 26 up with 22 on. Rigg took full advantage of an easy snooker opportunity with a 6 point foul conceded by Humphries. Rigg tucked him up again but a great escape followed and Humphries soon finished it off with a cut brown with the rest and dollied the blue and pink in nicely. Mike Crook 91-47 Darryl Hill, receiving a start of 70 can bring its own pressures, especially when your teammates start ribbing that, ‘you can’t lose with that start!’ Thankfully for Crook, Hill wasn’t at his best and left him a few sitters and together with cagey safety play the concession came on the yellow. John Kelly 33-52 Ivan McMaw, this boiled down to a good scrap on the final brown where Kelly was unlucky to go in-off. McMaw took brown and blue to leave Kelly needing both remaining balls for a re-spot, however the pink went McMaw’s way soon after. Geoff Hall 53-46 Jez Hill, with both teams desperate for the extra point the finale was a tense affair. Both players had numerous shots on the final black before Hall took it with the rest. A much needed win for Peel, though having played a game more than the other contenders will need results to go their way. Blinders will need three big wins in their remaining matches to have any chance after this result.

Dave Kelly 68-57 James Goodwin, Kelly started well stringing a few pots together to catch up the 35 start. Goodwin replied with a few of his own, then Kelly nearly had his first 20 break in the league, but left a red on the lip of the pocket. A few more pots and he was over the line. Paul Smyth 61-34 Alec Oates, Oates started with tight safety play but Smyth matched it and a good battle commenced. Smyth got in first with a few pots, twice missing the ball for a 20 odd break. Oates had a few good single pots but couldn't get the colours going. From thereon in Smyth hardly missed a pot, and with the help of a tasty 20 break closed out the frame. Darrell Thacker 85-61 Tony Pring, despite giving a 35 start Thacker had his potting boots on with teen efforts to bring the scores level. A spirited fight from Pring, with some excellent pots wasn't enough to stop Thacker crossing the line. Dan Crawley 109-65 David Quayle, it was like Crawley hadn't been away, giving away 49. He was straight in with a very nice 24, and split the pack beautifully, but unbelievably wasn't on another red. Quayle strung a few pots together, but Crawley was in again with 27, then also missed the final black on 18 for another break in amassing 109 points. James Kerr 90-38 Mark Quinn, Kerr was giving away 35 but was straight out of the blocks with small breaks. Postie put up a brave battle, but the run of the balls for once was going Kerr’s way. Kerr could just feed off the Postie misses and another couple of breaks to close out a very convincing, well timed 5-0 win for the league champions.

John Kennish is through to the play-offs of the Newfield Premier Snooker League in double quick time after defeating Darryl Hill 5-1 and then Peter Kirkham 6-0 in week 4’s matches. A late change to the match schedule, due to players being unavailable meant a busy but profitable afternoon for last season’s runner up.

Defending champion Hill had won his opening two matches of the league and took frame 1 with breaks of 48 and 20, but from then on it was all Kennish as he gained revenge for last season’s final defeat. He rattled off the next five frames including breaks of 47, 62, 45, 22 and fine effort of 94 in the final frame, narrowly missing the final black for a century clearance.

Kennish wrapped up his next match in just 90 minutes, again he was scoring heavily, 51, 56 and a 78 being his best efforts. Kirkham did make a fight of frames 4 and 5 in which he had breaks of 38 and 32 but could not prevent the whitewash.

Kennish, with 12 points heads the league having won all his four matches, dropping just 3 frames from 24 played. He still has two matches of the league phase to play but his play-off place is assured. Tom Miller and Darryl Hill have 6 points and Calum Gardner 3.