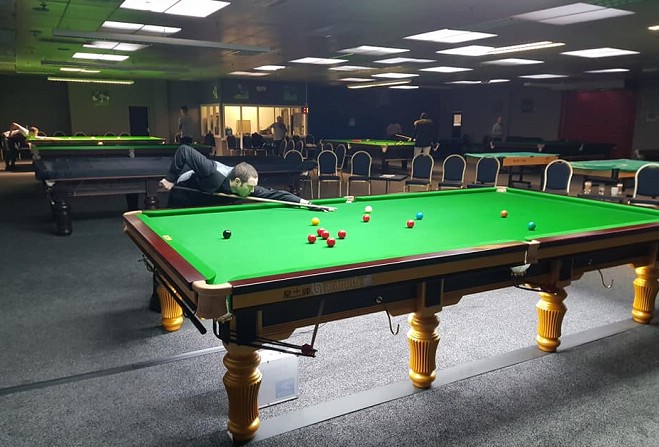 Malew, who have led all season have now been joined at the top by the Hurricanes after week nine of the Macs Builders Merchants snooker league. Cue Zone Mob 1-4 The Hurricanes

A fifth win in a row put Hurricanes joint top as Paul Smith reports. Steve Finnegan 36-65 Jamie Wilson, not much to report on this one, Wilson is proving difficult to beat this season and this frame was no different. He potted steadily throughout the frame and Finn never got out of first gear, in fact his snooker was as flat as his van tyre. Dave Addinall 84-81 Stu Littlewood, two form players so something had to give. Addinall knocked in an early 22 break to cut the 49 point deficit, but Littlewood steadily amassed points to give him a good lead heading to the colours. It looked like he'd wrapped it up with Addinall needing 2 snookers on the green, however Addinall showed his tactical side by getting the snookers and then his potting prowess to clear the colours and inflict the first defeat of the season on Littlewood. Lee Hunt 44-75 Chris Dagnall, another player in fine form Dagsy made short work of this frame. After giving Blade a lesson on the practice table Dagsy continued the theme on the match table running out a comfortable winner with the aid of a 31 break. Steve Oates 52-71 Gary Conwell, Oates protected his 28 start for the majority of the frame, but some fine potting and minor breaks from Conwell meant it was nip and tuck going into the colours. A dangerous situation for any of Conwell's opponents as his mixture of table craft and potting proved in this frame. A welcome return to form for Conwell recording his first win of the season. Peter Kirkham 19-64 Paul Smith, a 14 point start for Smith proved crucial as he had the best of the early exchanges and built a lead of 30 points. Kirkham was limited to half chances, but with his long potting that's sometimes all he needs and he created a chance midway through the frame. However after it looked like he might be building a break he ran out of position leaving an awkward brown that he missed. Smith picked off balls and used the baulk colours as a safety net before knocking in a 21 break that virtually guaranteed the frame. Kirkham carried on and got a couple of snookers, but Smith escaped successfully each time and the frame finally ended with Kirkham conceding on the yellow.

Five wins followed by four losses now for Malew who cling on now a joint leaders. It started well enough with for them with Mark Quinn taking another frame on the black, Rob Callister 43-47 Quinn. Dollin Mercer comfortably levelled, pulling back a 49 start for James Goodwin 119-63. Reprobates players of the season so far, Brendan Clague on the black and Paul Tangeman sealed the win with scores of 51-42 and 71-47 against Eric Drinkwater and David Quayle respectively. Alec Oates got back to winning ways on the black and pull one back, Rhys Moore 90-93 Oates.

This match pitted fifth v fourth and despite being a man short courtesy of illness and isolating the Rockets came away with the win. Marek Kenny extended his start and took the first 93-64 against Sean Corkish, with the frame lost Corkish polished it off with a 25 clearance. The next two went Matt Radley 46-61 Darrell Thacker and Graham Ashton 69-55 James Kerr which was settled on the black. Effectively the decider saw Jonny Hogg, back as sub after an eight year absence against James Kerr and played very well considering. With Hogg playing with the rest, just needing the final long pink which was glued to the side cushion, he dropped it in to make it a memorable return to win 66-55. You never lose it as they say.

Good to see Wannabes win for a fifth time and they are nicely placed in the heady position of mid table. Harry Minor made his first appearance for a while won 61-42 versus Nick Heaver before Steve Cowin went down 39-55 to Kam Virk, a fourth win in five for Virk after a slow start to the season. Paul Mckinstry put Wannabes back ahead 66-37 over debutante Tom Charmer and Fred Corris sealed victory with his seventh frame of the season. The clash of the in form players Dave Corris and Lee Gale went decisively the way of the latter 15-52.

After two wins to start the season the champions have stalled and went down narrowly again. The highlight for the home team was a 27 break for Adam Dooley and for once there were no nail biting frames. Scores, Adam Dooley 58-33 Josh Rigg, Ste MacDonald 33-48 Sam Palmer, Pat Maher 25-56 Brandon Forrester, Simon Gardner 87-13 Scott Campion and Zain Abideen 26-71 Ivan McMaw.

Peel Legion 1-4 Port St Mary Legion  Having waited nine months for a win PSM made it two in two weeks in the bottom of the table battle of the legions. A nice 27 break from Don Humphries got the home side off to a good start winning 80-48 against Dave Pickersgill though there was a late fightback from the PSM man, who got one of two snookers required before eventually conceding. The next two frames followed similar patterns, firstly Tom Curphey and Phil Joynes didn’t hang around, Joynes breezing around the table with plenty of small breaks. Curphey found his range late on and whilst his break was on 15 went for a fine blue, missed it completely but the cueball ended up bouncing off three cushions before nestling dead onto the blue and snookering Joynes on the last red. Joynes needed the last three colours to win and rattled the black but got it with a nice cut into the corner after Curphey’s attempt failed, 55-66 to Joynes. Peel’s other youngster Barton Beaumont was up next and his opponent Shaun Roberts seemed to be striking the ball very nicely throughout to reel in Beaumont’s 35 start. Beaumont needed yellow to pink to win and when he put green brown and blue away it was on, however the cueball slid behind the black and he did well just to make contact with the pink. After a miss or two each it was Roberts who took pink and black to win 67-72. PSM deservedly won the final two frames which did drag on a bit! John Kelly 37-57 Marc Morley a scratch game with neither at their best, then Geoff Hall was no match for Terry Boyle who eased away 24-69 to cap a good night for the southerners.Malew and Hurricanes head the way on 28 points, St Olaves A and the Rockets are joint third both on 24. Next week the stand out matches are Malew hosting the Mob, Hurricanes v Musicians and this season’s surprise package, Wannabes travelling to St Olaves A. Stu Littlewood, Jamie Wilson and Mark Quinn now share the lead in the individual league on 8 wins. Dave Addinall still tops the high breaks league on 28 points from John Kennish on 20.5 and Sean Corkish on 12.5.