On Air The Morning Show Marc Tyley | 9:30am - Noon
Belle And Sebastian - I Don't Know What You See In Me Download 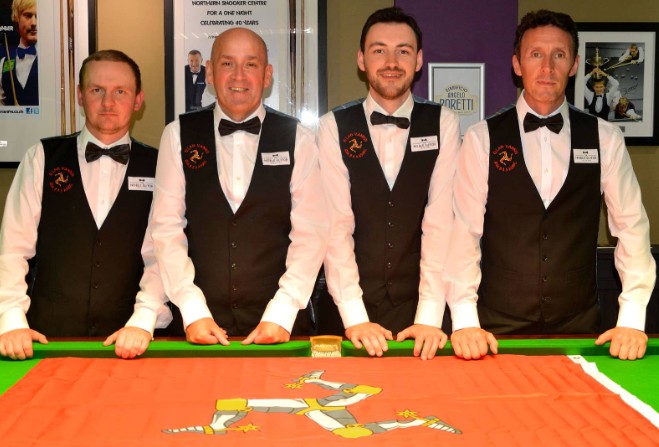 The Northern Snooker Centre in Leeds was once again the setting for this year’s Home International Snooker event, back after an absence of three years. The Island’s Mens team were drawn against England A, Scotland and Wales B in the group phase, whereas the Masters, (for players aged 40+) took on England, Republic of Ireland A and Wales B. The top two teams would join the top two from another group to play for the Championship whereas those teams placed third and fourth would drop into the Cup competition. Representing the Island in the Mens team was Darryl Hill, Jamie Wilson, Tom Miller, Peter Kirkham and Peter Crellin. The last three named all were part of the Masters squad also, alongside Chris Dagnall, Paul Smyth and Mike Crook.

After a very early start for the boat the Mens team were first to compete at 7pm against a strong looking Wales B. Wales soon had three frames on the board as Ben Fortey with breaks of 63, 103 and 77 blew away Kirkham in just 30 minutes. However, it wasn’t all one way traffic as Hill hit back with a 2-1 win which included a 55 break, Miller lost out narrowly 2-1, but a great win by Wilson 2-1 left the final score Wales B 7-5 Isle of Man. A top effort against a team that ultimately would make the Championship Final and nearly a memorable win as with the last three frames in play, the IoM were leading 5-4. The Masters team went on even later at 9pm against the small matter of England. A very long day ended 10-2 in favour of the English but had three black ball frames gone the other way it would’ve been a lot closer. Our point scorers were Kirkham, he lost very narrowly to former world 63 Simon Bedford 2-1 and Smyth lost 2-1, all tight frames on the black.

The Masters were back in action early on Day 2 against a very strong Republic of Ireland A quartet. However, a decent night’s sleep saw the Manx team in good form. Miller winning on the livestream Star table 2-1 against Mark Tuite, the 2014 European Masters champion and quarter finalist this year. Crellin won 3-0 on the table used for the 2006 world final and Dagnall picked up a vital frame in his 2-1 defeat. With a 6-6 draw already guaranteed, Smyth was 2-0 down, needing a snooker on the final blue in his third frame to get IoM over the line. Against all odds he achieved this, even though snookered himself on the final blue, he escaped and potted it, then got the snooker required and took pink and black to give the Masters team their first ever Home International win, IoM 7-5 RoI A. A result that will be remembered for a long time. Later on, the Mens team were far from disgraced in losing 8-4 to England in their 2nd match. Containing one ex-professional and three other strong young players Hill and Wilson both picked up a frame in losing 2-1. Miller took a second victory on the day, 2-1 over a potential future star in Ryan Davies. Kirkham couldn’t quite come to terms with the Star table, set in its own mini arena, losing 3-0 to ex-pro Jamie Curtis-Barrett. In the final match of Day 2 the Masters team couldn’t hit the heights of earlier on, but it has to be said Wales B were very good indeed, Dagnall lost 3-0 and so did Crook on debut, he found the going very tough, failing to score a point in frame 1 as his opponent opened with a 33 break and followed up with a 54. Smyth took the opener in his match but his opponent then moved through the gears, scoring heavily to win 2-1. Crellin had the ‘privilege’ of playing on the livestream arena table and although he lost similarly 2-1, he didn’t disappoint the viewers with a gutsy effort and deservedly took the last frame. Final score, Wales B 10-2 IoM.

Day 3 saw the end of the group stages and started with the Mens team taking on Scotland. Hill and Miller both had 40+ breaks but lost final frame deciders and Kirkham picked up a good 2-1 result. Meanwhile Wilson’s opponent had breaks of 50 and 80+ and barely gave him a chance. Final result Scotland 8-4 IoM. This and other results left both of the Manx teams dropping into the Cup competition.

Sadly there was no more glory for either of our teams in the Cup, where the winning team was the first to five, in two frame matches with a one frame shootout in the event of a 4-4 draw. The Mens team lost their semi final, 5-2 to the Republic of Ireland, Hill and Miller scoring our points. Then, playing for 3rd or 4th place against Wales C and it ended in a 5-1 loss, Hill winning our only frame with 40 and 30 odd breaks. Crellin, eligible for both teams lost one of his two frames on the black whilst making his Mens debut. The Masters Cup semi-final ended Republic of Ireland B 5-2 Isle of Man. Kirkham lost his 1st frame on a re-spot black, but hit some form in the second to level, and a couple of 20+ breaks helped Crellin claim a 1-1 draw and take IoM’s other point.

The resultant 3rd/4th place Masters play off was the Island’s last match of the weekend early on Day 4. Crellin, with a lovely 56 clearance went on to draw his match 1-1. A quiet evening of 9-ball and lemonade seemed to have helped Dagnall, he returned to form with a 2-0 win. Crook lost 2-0 but Smyth dug in and once again won a vital frame, the final one in play to force a one frame shootout. Crellin was rightly nominated to play for IoM, up against his earlier opponent. Sadly, another victory for the Masters team wasn’t to be as the Scottish player knocked in a lovely 50 break, final score IoM 4-5 Scotland.

The greatest achievement over the weekend from a Manx perspective was that of our referee Dave Kelly. He was kept very busy due to a shortage of refs and impressed the senior officials so much he was awarded the honour of taking charge of the main arena, livestream table for Mens Cup and the main Championship Final itself. Not bad for someone in only his second year officiating and first off-island trip, well done Dave! Refereeing is not just about re-spotting the colours and racking the reds, it can be a very demanding job as Ken Kinrade can vouch for, he also kindly assisted the officials on numerous occasions. The Cup Final itself finished Scotland 7-2 Republic of Ireland and England B ran away with the Championship Final, they were super impressive defeating Wales B 7-1.

So in the end it was effectively the wooden spoon once again for both Manx teams, but considering the pool of players available in the Island compared to the other Home Nations this was still a very creditable performance where six of our eight players scored at least one individual match win.