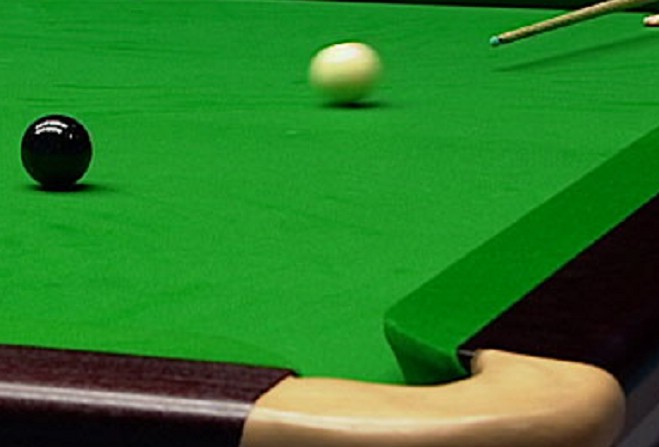 With only three weeks of the Macs Builders Merchants Snooker League remaining, it’s a three way tie at the top. Finch Hill Rockets, who had their bye this week were caught by St Olaves A and The Hurricanes, with the latter now only having two games to play.

The Hurricanes desperately needed a win here but just came up short. Mike Doherty 78-85 Jamie Wilson, this required a re-spotted black after Wilson came back from 50+ behind. Dave Hanlon 80-49 Stuart Littlewood, another good win for Hanlon who is on the verge of a handicap cut. Vinny Dale 89-57 Chris Dagnall, a fluked blue from Dale that doubled in the length of the table after doubling brown into the yellow pocket was decisive. Matthew Dodd 71-84 Paul Smith, highlight of the night was Smith’s 33 break. He could have rolled pink in for 39, but tried to force a red off the cushion. The decider ended Peter Collister 103-34 Steve Munk. Munky was given a proper lesson by Collie.

Bottom team Wannabes made the title contenders work very hard for a narrow win. Fred Corris 62-73 Darrell Thacker, another win for Thacker, who with a remarkable 19 wins from 21 frames is on the cusp of claiming the individual wins title. Harry Minor 81-105 Sean Corkish, a 24 break from Corkish making the difference. Wannabes then came back strong with stalwarts Steve Cowin beating James Kerr 91-35 and Paul McKinstry 75-40 over Dave Kelly, both holding onto their handicap starts and in McKinstry’s case going away for big wins. It took another top potting performance from St Olaves A team captain Paul Smyth to take the crucial decider against James Teare 72-94. Smyth with a 35, (equal best of the week with Zain Abideen) plus a 25 clearance made it yet another quick frame. St Olaves have now won their last ten meetings with the Wannabes.

The Mob are now just five points back in 4th and could yet still have a say if any of the favourites suffer a heavy defeat. Tom Miller 96-74 Tony Pring, runs of 33 and 22 for the Island Championship semi-finalist Miller. Dave Addinall 84-51 Alec Oates, surprisingly no breaks from Addinall this week though he still leads the high break league from John Kennish. Frame three finished Steve Oates 38-55 David Quayle to keep the match alive but Steve Finnegan with his 14th win of the season 83-70 over James Goodwin saw the Mob to victory. Finally, Peter Kirkham 59-83 Mark Quinn also was a 14th win for Malew’s player of the season Quinn.

Just pride to play for here with Peel looking to avenge an earlier defeat at The Cue Zone. John Kelly 66-45 Brandon Forrester, both were potting well but an unlucky in off black from Forrester swayed it Kelly’s way to win on the blue. Mike Crook 31-75 Martin Rigg, debutant Rigg cruised to a deserved win in what was Crook’s worst effort of the campaign. Tom Curphey 57-67 Ivan McMaw, a frame which started with an incredible run of fluked pots, mostly from Curphey who did well to nearly pull off an unlikely win. McMaw’s stronger potting just saw him home on the pink. Barton Beaumont 69-52 Scott Campion, the frames were ticking over quite quickly until this. Campion in particular struggled but did cue a few long straight ones towards the end. Beaumont with thoughtful safety play and good single long pots on blue and pink took the match to a decider. Geoff Hall 79-10 Darryl Hill, Hall with a 42 start was never threatened as he produced a very solid display of safety and potting. A nice cannoned pot red to get him out of a tricky situation was well thought out. Eventually Hill 58 behind with 67 on got a reasonable chance but promptly failed to land quite as well on the black as intended, missed, and Hall stepped in to put the frame out of reach.

Back to back 4-1 wins for Jacksons. Frame one ending Johnny Myers 39-59 Tony Dhadwal, both potting well and Dhadwal overcame some good snookers from Myers to win with blue and pink. Next up was Adam Dooley and Paul Kell. Dooley has had a good second half of the season and ended up pulling off his 7th win in a row, this time with a re-spot black 75-68 and will be having another handicap cut. Ste MacDonald 35-71 Lee Gale was a classy frame, Gale once again scored freely. However, a foul cost him as MacDonald pulled off a great 21 break only for Gale to clear up on the colours for the win. Calum Gardner 57-86 Alex Sinclair, the Jackson’s player building on last week’s debut win with another fine performance and seal the win. Last frame was Zain Abideen vs Kam Virk. Virk started well to extend his start but Abideen pulled off an amazing break of 35, to catch up. It was nip and tuck thereafter before Virk snatched it with a difficult black to the green pocket, 59-60.

Next week’s two crucial matches are Finch Hill Rockets vs DSB Wannabes and St Olaves A vs Newbys DSB. The Hurricanes have their bye and will be hoping for a major slip up from the other co-leaders. Thanks to Paul Smith, Paul Smyth and Kam Virk for match details.

The week 9 matches of the Castle Cabs - Isle of Man Premier Snooker League proved pivotal in the race for the play offs as Tom Miller and John Kennish both joined Darryl Hill in the final four.

Kennish had a tough afternoon with Paul Smith who produced his best snooker of the league. Smith took the opener 71-5 and as Kennish looked certain to level with a 54 break, Smith made a 30 of his own, but whilst attempting to clear the table, potted the final blue but came up short on the pink. Eventually Kennish took the frame 65-55. After a 50 minute third frame Smith edged 2-1 ahead winning 64-45 and looked in a good position to claim his first point. However, Kennish then reeled off the last three frames 64-2, 60-24 and 85-53 with a top run in those frames of 38 and take the match 4-2.

Hill is now confirmed to finish first on completion of the league phase and Miller and Kennish are also confirmed in second or third and will be facing off in the play-offs. Hill's opponent in the last four could still be any from three, with Crellin, Peter Kirkham and Sean Corkish all in with a chance of making it.

Next week's final three league matches will be played on Saturday, 3rd July from 1pm at The Cue Zone with Peter Kirkham against Paul Smith up first. This will be followed by John Kennish v Peter Crellin and rounding off the league phase will be Darryl Hill v Sean Corkish. All matches will be streamed live on the IoM Billiards and Snooker Association Facebook page.