Snooker: Top five all miss out on wins 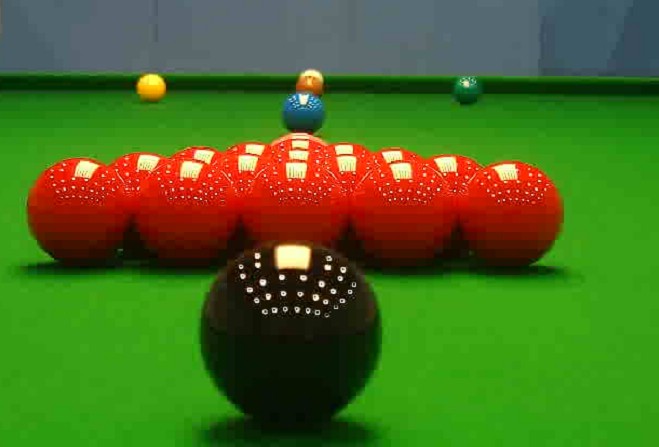 None of the top five teams recorded wins in the Macs Builders Merchants snooker league which now has just five weeks remaining.

Marek Kenny 33-59 Marc Morley, Kenny started well but went off song quickly after Morley put him under pressure, potting superbly. With the scores almost level and one red left, Morley then cleared up to the black, a very impressive pin point accurate break of 24. Jonny Hogg 70-31 Matthew Astill, this dragged on for over an hour with Astill only scoring 3 points! He had been in form of late so Hogg’s safety game must have been something to behold as the colours went safe to complicate matters. A series of teen breaks won it for Hogg. John Spellman 36-49 Phil Joynes, lots of safety until Spellman got in with a useful 15 break but missed a pink he'd usually get. Joynes escaped a couple of snookers well and ultimately Spellman was unlucky to double kiss an attempted pink and leave it hanging for Joynes to clear with the black. Graham Ashton 60-50 Dave Pickersgill, after an early missed red from Ashton, Pickersgill extended his 21 start. The reds soon spread all over and a long safety battle behind the black ensued. Ashton managed to claw himself into contention but was almost putting his cue away as Pickersgill potted the pink to win, but the white went in-off in the middle. Ashton accepted the lifeline, going on to win on the black. Matt Radley 14-55 Terry Boyle, Radley had one of those nights nothing went his way. Boyle  always seeming to have an easy red and colour, then run away to safety. A good result for PSM but as things transpired, not too bad night for the leaders also.

The Mob were top two weeks ago, but after this shock result drop to seventh, whereas Blinders, who I wrote off last week went from seventh to equal second. Martin Rigg 66-59 Steve Finnegan, Rigg won this despite potting the wrong ball on the colours. Having taken the last red with a yellow, he waited for the referee to re-spot the yellow and then promptly sunk the green! Calum Gardner 69-50 Peter Kirkham and Jez Hill 97-31 Lee Hunt made it safe for the Blinders. Ivan McMaw (23 break) beat Tom Miller (21) 92-71, then Darryl Hill was in fine form with runs of 46 and 31 to take the finale 100-76 over Steve Oates. Those pesky Blinders are back, but have they peaked too soon?

This was 4th vs 10th and despite Jacksons being on a decent run this was still a shock result.

Dave Kelly 37-74 Lee Gale, Gale came out potting, but could only string a couple together at a time, but it was enough to push ahead of an out of sorts Kelly. Gale continued to pick off balls until the handshake came. Paul Smyth 62-93 Kam Virk, Smyth started well closing the 35 gap, but Virk also knocked in numerous cracking pots to leave Smyth needing snookers. Requiring snookers Smyth got back in contention but left a thin cut yellow which Virk potted with the white travelling fast, hit the blue landing perfect on the green, and he took the frame well. Darrell Thacker 50-44 Alex Sinclair, with some solid potting Thacker quickly caught up the 21 start, Sinclair had a good few pots but it wasn't quite enough. James Kerr 39-77 Richard Hillier, giving away 56, Kerr didn't want to see his opponent start with a cracking tough red into the middle. This set the tone for the rest of the frame with Hillier dropping in a good pot here and there, and not really leaving much for Kerr when he missed. With the run of the balls going against Kerr at every chance it wasn't long before snookers were needed. Dan Crawley 62-71 Tony Dhadwal, this was the battle of the night with both players positive and the lead swapping back and forth. It was ball for ball battles right through the colours, until it was only the black left to decide the frame. A dramatic five minute mix of going for the pot, and it going safe, tense, well placed safeties until Dhadwal smashed an attempt into the yellow pocket, only to see the black travel off several cushions and from an extremely tight angle, dropped into the middle for the win. Great frame of snooker for the spectators and a great win for Jacksons who are a team that are improving fast week on week. Well done lads.

Considering that both teams were in with a serious shout of silverware this was a match played at quite a pace, all over within two and a half hours and a good watch to boot. Barton Beaumont 13-58 Vic Rigby, Beaumont certainly didn’t have the cueball ‘on a piece of string’ as he was given a thorough lesson in matchplay snooker by Rigby who celebrated his first visit in decades to the Legion in fine style! Don Humphries 44-71 Dave Hanlon, Hanlon with a 21 start always looked favourite. Humphries hung in being just 15 behind on the final green but a magnificent long pot via the jaws of a corner bag followed by brown and blue, corner to corner capped a fine win for Hanlon. Mike Crook 57-25 Matt Dodd, Dodd normally enjoys his visits to Peel, but for once Crook reproduced some of his practice form, he was potting them for anywhere. Dodd was unlucky when left with the final red which he took with a black, but in playing up the table for the yellow, overcooked it and went in-off and there was no way back. John Kelly 66-36 Dave McVeigh, this was surprisingly comfortable for Kelly chasing 28 from the off against a player with a handicap cut pending. Kelly was already 11 ahead with 5 reds left and later after being snookered on the green, McVeigh conceded. The decider was between Geoff Hall and John Kennish, Hall with a hefty 63 start against the five time island champion. Veteran champ Hall was still 36 up with 2 reds left following a 24 from Kennish and a 15 in reply from Hall. Kennish then played a series of snookers to which Hall had no answer. Kennish, needing just the pink for the match missed a series of mid/long range attempts and was ultimately lucky to leave Hall with both balls all but touching. Hall misjudged the snick to safety and deposited the cueball straight into the middle bag! Hall 84-104 Kennish.

Ste MacDonald 70-57 Jamie Wilson, a 30 break from Wilson put him in a commanding position, but MacDonald fought back on the colours and the frame went to the pink and black. With black over the bag it was a pink ball game, both players attempting pots and missing, eventually Wilson left a fairly easy pink to the middle and MacDonald potted pink and black for the frame. Jason Campbell 48-65 Stuart Littlewood, solid potting from Littlewood once he got going and although Campbell threatened to make a game of it he just couldn't get the scoreboard ticking over. Pat Maher 54-56 Paul Smith, giving 42 to one of the shoot out champions looked a tall order. Smith made early inroads and left Maher nothing. When Smith closed the gap to under 20 points with two reds left it looked like anyone's game. A bit of fudging followed with Smith taking a red and going for a snooker. He failed to get the snooker, but with the red tight on the cushion next to the blue Maher tried to tickle up and not disturb anything. He was short the first time, a bad roll on the second meant a second miss and the ref warned him it would be loss of frame should he not hit the red on his third attempt. Another slow roll, another drift on the cloth, another miss and the frame was awarded to Smith. This meant Maher had won two things in one week, the shoot out and the prize for being the first player in Manx League snooker to lose a frame on the three miss rule. I'm sure he'd rather give that one back! Simon Gardner 51-53 Gary Conwell, more drama in this frame! Conwell giving 28 started the frame as usual, slowly. A series of misses should have given Gardner opportunities to extend his lead but the luck was with Conwell and he left the balls safe numerous times after testing the cushions. Come the latter stages though Conwell usually comes to life and this proved to be the case with some fantastic long pots giving him a 14 break. Coming to the colours and it was anyone's, Gardner potting brown and blue and rattling a pink that everyone thought was in must have thought he'd won it. However it was Conwell who got the pink to take it to the black. Conwell had a long black to win, turned towards Gardner with his hand out only to find much to everyone's amusement that black had rattled and stayed out. Gardner good-naturedly asked Conwell if he was offering a concession, he then attempted the black but missed and left Conwell to finally pot black and take a well fought frame. Zain Abideen 50-38 Chris Dagnall, not much to say about this one. Both players struggled to find any rhythm with Abideen potting marginally better than Dagsy to take the frame.

A fine result for Malew, a man short and forced to field league debutant, Tommy Lawler against the seasoned Steve Cowin in the first. This went Cowin’s way on the pink 64-53 to effectively put Wannabes two up. However, Malew took the next three, all black ball frames, David Callister 68-73 Mark Quinn, Harry Minor 61-62 Eric Drinkwater and Paul McKinstry 72-81 Tony Pring.

Blinders and Peel have four games to play whereas the others have five.

Paul Tangeman, with no match this week stays top of the individual league with 15 wins from 18 frames. Calum Gardner, Rhys Moore and John Kelly are on 13. It’s very tight now in the high break league, Tom Miller leads with 26.5 points, Darryl Hill closes in on 25.5 and Calum Gardner stays at 23.