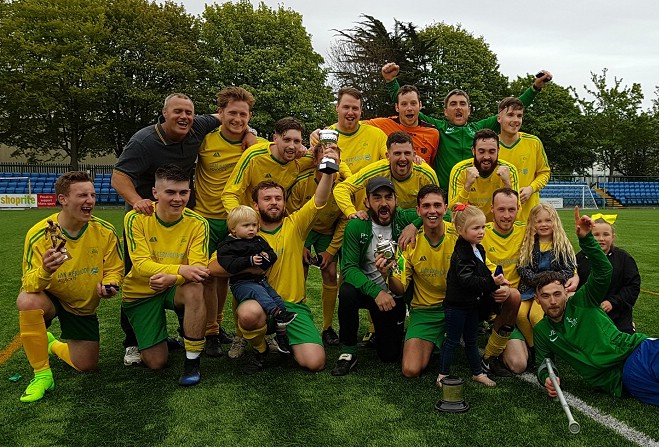 Josh Molyneux was the hero as St Mary’s lifted the Ascot Hotel Junior Cup on Saturday.

He scored the winner six minutes after the re-start to ensure the Saints ended the season with some silverware.

It sealed a 2-1 victory over Laxey at the Bowl to clinch the trophy for the club for the second time in their history.

In an attacking contest, Paul Doyle opened the scoring for St Mary’s with a 16th minute strike which Laxey goalkeeper Danny Mead – the hero of their semi-final success over Combination One champions Old Boys – couldn’t keep out.

Paul Riley headed past his own goalkeeper six minutes later to draw the Miners level and the match remained even.

St Mary’s were given the chance to regain the lead 10 minutes before the break when Mead was adjudged to have brought down Dean Spencer in the box.

However, the Laxey shot-stopper made amends by saving Doyle’s spot-kick.

An injury to Spencer before the break saw Molyneux enter the fray and he had a very quick impact, latching onto a through ball before calmly slotting home what proved to be the winner.

And a dogged defensive performance made sure Laxey’s threats were repelled to spark joyous scenes among the St Mary’s faithful.

Manager Paul Cromwell and assistant Jamie Charlton said it was a great boost at the end of a sad year for the club.